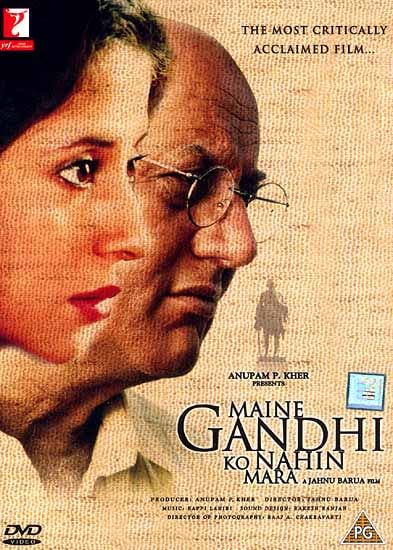 I Did Not Kill Gandhi: Maine Gandhi Ko Nahi Mara (The Most Critically Acclaimed Film) (DVD with English Subtitles)

Indian cinema has taken us to many exotic territories around the world.
Anupam P.Kher's 'Maine Gandhi Ko Nahin Mara' based on Jahnu Barua's unusual script carries the audience to an unchartered territory, where they have never truly ventured before... the human brain.

'Maine Gandhi Ko Nahin Mara' explores the complexities of the human psyche as it sets out to unveil a chiildhood trauma, which is re-lived by an intelligent mind suffering from a brain disorder called dementia. In his portrayal of a man suffering, Anupam P.Kher skillfully weaves the subtle nuances of a brilliant mind caged in the deluded world of dementia.

The film structures the narrative by telling a simple story of a man's illness and his daughter's love, understanding and commitment to find her father's treatment, which comes in the form of a young psychiatrist who unveils the father's demented world and carries him backwards on an awesome journey to finally confront his disillusioned guilt.

It is a film that connects two disparate events together. One, of a small middle class family in present day Mumbai struggling to come to terms with the fact that the head of the family, Professor Uttam Chaudhary, a retired professor of Hindi from Bombay University, is now suffering from early dementia and two, the assassination of the father of the nation, Mohandas Karamchand Gandhi. The process of the diagnosis and therapy is reflective of other issues. Issues that indirectly make their way into the audience's consciousness and raise questions on our respnsibilities as citizens, for our subsequent failure to disseminate Gandhiji's ideas and his legacy to contemporary India. The professor's often repeated and exasperated denial 'Maine Gandhi Ko Nahin Mara' is rooted back in an era when a truth seeking son of India became the father of a newborn nations. Someone killed this man, but his truth survives... even if it is fossilized in the wounded souls of the demented.

# Digitally Re-mastered from the Original Film

# The Making of the Film

# Glimpse from the Premiere & TV promos