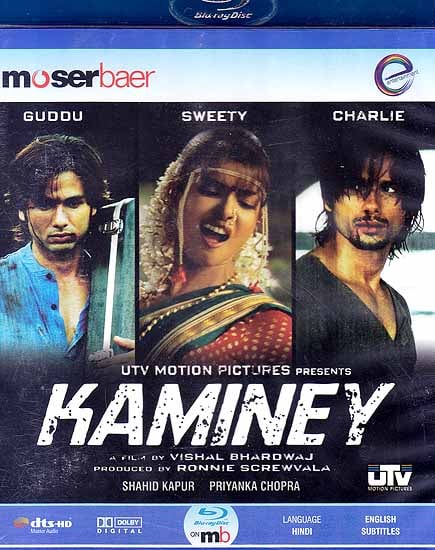 Kaminey is a story about a pair of twins – Charlie & Guddu who can’t stand the sight of each other. They are as different as chalk and cheese, Charlie lisps while Guddu stammers.

One fateful rainy night, their carefully separated lives cross paths. Charlie gets mixed up in a deathly get – rich – quick scheme, while Guddu realizes that the love of his life, Sweety, has unwittingly put a price on his head. It’s a dark comic ride here onwards, as the brothers are sucked into a world of drugs, guns and money. Their lives collide head on with gangsters, rebel soldiers, rogue politicians and crooked cops. In the middle of this crazy adventure, the brothers have to run to protect themselves, their dreams and their love…

And most importantly, they realize that all they have is each other.

Caution: This Blue Ray Disc cannot be played on any VCD and DVD players. This Blu Ray Disc can be played back only on Blu Ray enabled multimedia systems. Picture quality is a function of the original source material.