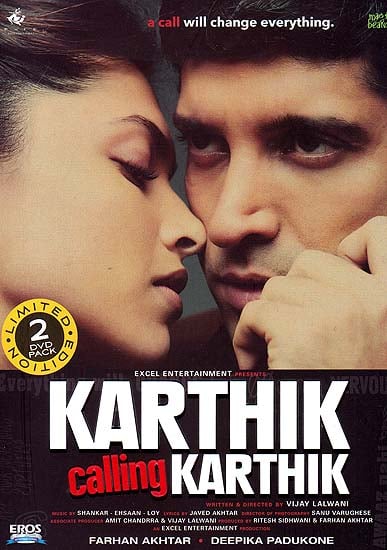 $22.50
Notify me when this item is available
Save to Wishlist Send as E-card Share by Email
From the DVD

KCK offers everything you look for in a good movie – Hindu
Farhan Akhtar is brilliant in this thrilling and touching tale – IBN Live
Farhan Akhtar rocks on. Deepika’s effervescent – Times of India
A film that can safely be labeled a movie that can even please Hollywood buffs – Filmfare
Karthik Calling Karthik is a film calling in all admirers and connoisseurs of intelligent thrillers – India Times

Meet Karthik: an introvert by nature and shy by choice. Karthik suffers with huge confidence issues and is miserable at his less than average job. His boss treats him like dirt. Shonali, his colleague who he secretly loves doesn’t even know he exists. Karthik is a loser, knows it, and accepts it.

And then one day the phone rings. Karthik speaks to someone who also claims to be Karthik, and promises to change his life.

Soon begins the thrilling and soulful journey of this lovable loser’s victory against all odds with the help of his mysterious friend.