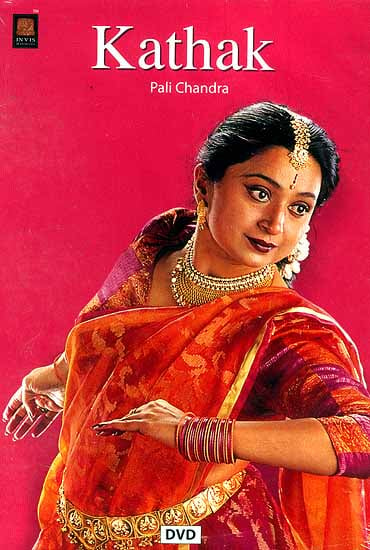 $30.00
Notify me when this item is available
Save to Wishlist Send as E-card Share by Email
About the DVD Content : Kathak performance with English subtitles

Compositions
1. Chali akelee naar
2. Bihaari ko apne bas kar paavum
3. Na maanoongi
4. Om Jayanti mangala kari
5. Tarana
In Chali akelee naar, Pali Chandra describes the myriad emotions of a woman determined to meet her beloved. In Bihaari ko apne bas kar paavum, the yearning plea of a love-struck woman to Krishna, longing for his eternal love in return. In Na maanoongi Pali Chandra describes a woman’s conflicting emotions and anger eventually melts away when her lover appears. Om Jayanti Mangala Kali is in praise of Goddess Kali and Tarana is a synthesis of music and rhythm. Relish the awe-inspiring grace of Kathak with Pali Chandra an accomplished artiste of Kathak.

Kathak is a classical dance from Northern India. Both Hindu and Muslim rulers patronized this dance form giving it the status of a court entertainment. Hence this classical dance carries the quaint charm of folk arts and a happy synthesis of Indian and Mughal traditions. Kathak is a combination of Nritta and Nritya. Intricate footwork and rapid pirouettes which end in statuesque poses are the dominant and most endearing features of Kathak.

Pali Chandra is one of the prominent Kathak dancers of modern times. She is the disciple of Guru Vikram Singh of Lucknow Gharana. She is the youngest recipient of the prestigious Lachhu Maharaj Award (1988). She won the Gold Medal for her performance in Prayag Sangeet Samiti in 1990. She has given lecture demonstrations at Oxford University, London School of Contemporary Dance, Phoenix Arts, Leicester, the Academy of Indian Dances and Hong Kong University. She has also performed on Doordarshan (Indian National Television), BBC and TV Asia Network.