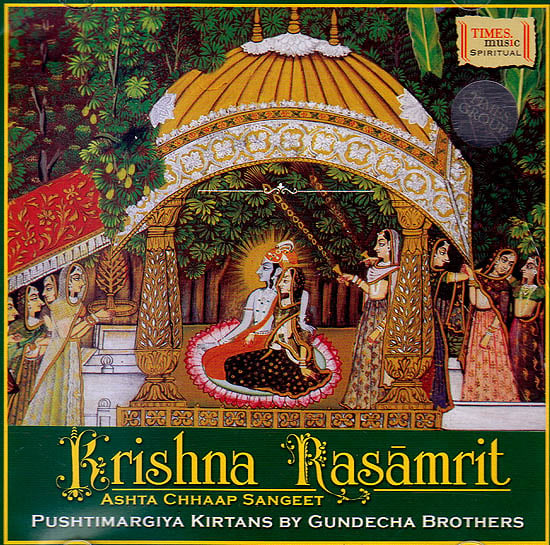 Born in the illustrious clan of Jagadguru Shrimad Vallabhacharya Mahaprabhu the fourth son of the revered Acharya H.H. Nitya Leelastha Pujyapada Goswami 108 Shri Gokulnathji Maharaj of the holy seat at Briham Mandir Mumbai H.H. Nitya Leelastha Pujyapada Goswami 108 Shri Mukundraiji Maharaj Showed great interest in music from his early childhood. Eminent artists regularly performing at the holy seat at Brihan Mandir inculcated deep interest for music in the young mind. Though it is not known as to who was his guru but as he grew up he looked upon Ustad Amir Khan Sahib as his mentor. His musical talent reached unparalleled heights under the distinguished tutelage of the late Ustad. He became an accomplished Veena Vadak and he introduced the Gayaki Angra in his playing. His Holiness was also a great composer. It is a noted fact that even the late Ustad sang his compositions especially meri Palakam so Maga Jhaaroon in Darbari kanhara is still fresh in the mind of music lovers. A few of his compositions were used in the films of fifties sixities by prominent music directors who were his fast friends. As a friendly gesture his holiness has played Veena for background scores in films the last being Satyam Shivam Sundaram for the legendary film maker. Shri Raj Kapoor.

His Holiness also composed music and directed Radha Piya Pyari a dance ballet based on the Bhaava of the Ashta Nayikas. The ballet was choreographed by Pt. Lacchhu Maharaj the Kathak exponent which ran into packed houses.

Gifted with charming princely looks with a calmness and serenity of a saint. His Holiness was immensely revered and worshipped for his unconditional services and passionate attachment to his Lord Shri Balakrishnalaji the presiding deity at the holy seat of Brihan Mandir.

His Holiness was instrumental in reviving the ancient style of Dhrupad Dhamar in the Pushtimargiay Kirtans. A compilation of his compositions is published in a book titled Naad Rasa.

An Acharya’s great musician composer a legend his legacy continues to live in his work.

Ashta Sakhas or the eight friends of Lord Shrinathji, viz; Surdas, Kumbhandas, Paramanandadas, Krishnadas, Govind Swami, Chatrabhujdas, Nandadas and Chhita Swami, were the disciples of Jagudguru Shrimad Vallabhacharya Mahaprabbu and His second son, Shrimad Visthalesh Prabhucharan, the profounder of Pushtimarg, the path of Divine Grace. Both the Acharyas blessed them with the divine visions of the various divine sports of Lord Shrinathji. They sang the glories of the Blessed Lord of His various pastimes ranging from mangala to shayan.

The works of these devotional poets in Vrajbhasha, is a major boon to the literary world. Pregnant with the in-depth meaning of the shastras, these patios, sung in numerous ragas (according to time and season), set in different rhythmic cycles (usia), intricately woven in various metric tables (chhanda) have mesmerized scholars from religious, music and literature fraternity.

Based on the ancient Dhrupad style of singing, the Ashta Sakhas created a distinct style of their own, which later was termed as ‘Ashta Chhaap Sangeet’, popularly known as the ‘Havelli Sangeet in the modem times. Many contemporary devotional poets were so impressed that without any hesitation, they adopted their unique style and sang before their respective Lords, Even presently, these kirtans are being sung in every vaishnav household where the Pashti Purisshoaama resides.

With the passage of time this five centuries old rich tradition of pushtimargiya music has undergone many changes Ashta Chhaap Sangeet can be classified into various schools viz Vraja (Mathura Gokul) Nathdwara (Mewar) Saurashtra (Gujarat) Benaras and Brihan Mandir (Mumbai) are amongst the most prominent schools of Ashta Chaap Sangeet Each of these schools has its own distinct flavor keeping the originality of the Vraja decline in the unfortunately in the last few decades we have witnessed a serious decline in the quality of our music. Though a lot of awareness for kirtans is created in the recent times but, I must admit that we have failed to produce a new generation of properly trained kritankars. Due to this one could find lots of impurities in terms of raga and the style of singing the kirtans. The Dhrupad Anga became a rarity.

H.H. Nitay Leelastha Pujyapada Goswami 108 Shri Mukundraiji Maharaj (Brihan Mandir Mumbai) who was pre eminently qualified for an assignment such as this as he was not only an Acharya of the Sampradaya but also a great musician in his own rights tried earnestly to fill this world. He not only modified the incorrectly sung kritans by the modern age kritanyas but also composed many kirtans in the Dhrupad Dhamar Style.

Krishna Rasamrita is a compilation of ten such beautiful compositions by his holiness. The beauty of these compositions lies in the manner in which the Bhaava of the poet is flowing with Sur. The essence of Dhrupad i.e. Sthayi antara, sanchari and aabhog is aesthetically mainained.

In this album we have not followed a theme or a sequence of kritans either nitya pada i.e. sung from mangala to shyam or kirtans related to a particular festival (utsava) or season (Ritu) Rather we have focused on the Dhrupad gayaki which was once the only way of singing these devotional songs. It is an effort to revive the ancient shaili which is now very unfortunately though found infused with the khayal style. I hope our humble effort will be appreciated by not only the devotees of the pushtimarg sect but also the traditionalists and connoisseurs of classic music.

My heartiest blessings to a devout vaishnav couple and their family ardent disciples of His Holiness for having extended their unconditional support towards this project I pray for their well being.

I would also like to thank Smt. Mrinalini and Shri Dinendra Bhatia for being very kind and encouraging right from the initial days when we would rehearse at their house for long hours.

I personally thank Smt. Kokilaben Shah and Smt. Kalpanaben for providing me with the recordings and notations of the padas by His Holiness and all other devout Vaishnavas who have in some or the other manner been a part of this prestigious project.

Times music for making this devotional music available to thousands of bhaktas all across the world.

Special thanks to the Gundecha Brothers (Shri Umakantji, Shri Ramakantji and Shri Akhileshji) for being very understanding, flexible considering that they were for the very first time venturing into a new genre of devotional music. They have indeed gone all out to fulfill my dream my passion.

Thanks to all the trustees of geet Sangeet Sagar Trust for rendering relentless selfless services for the propagation of Pushtimarg.

A 500 year old tradition on the Dhrupad Gayaki the Ashta Chaap Sangeet Popularly known as the Haveli Sangeet is one of the most prominent aspects of Krishna Bhakti precached by Jagadguru Shrimad Vallachacharya Mahaprabhu and his son shrimad Vithalesh Prabhucharan the profunders of pushtimarg.