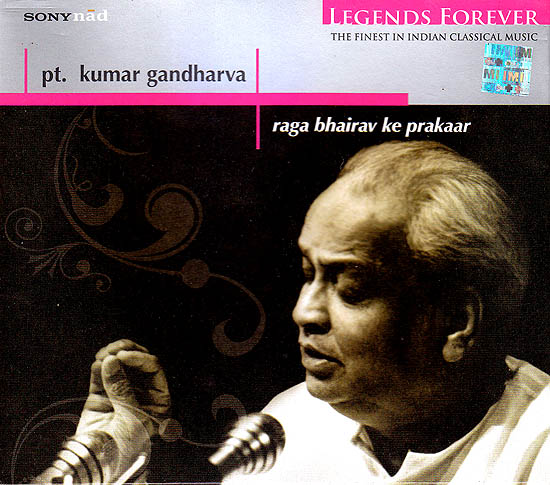 The details of Pandit Kumar Gandharva’s life are by now welt known to followers of Hindustani music. Born Shivaputra Siddhramaiyya Komkali in 1924, he first appeared on the classical music scene at the age of ten, a child prodigy. It was then that he acquired the flattering title by which he was known for the rest of his professional life (a Gandharva is a celestial musician, Kumar is a young boy or prince). The young artist’s promising career appeared to have been cut short by a serious illness which confined him to bed, forcing him to refrain from singing for no less than five years (1947 - 1952). Remarkably however, Kumar Gandharva was able to resurrect his career, and ultimately to establish himself as one of the modern greats of Hindustani music.

It has long been a cliche, in writing about Kumar Gandharva, to describe the artist as’ controversial’. To a relative outsider this always seemed perplexing. He was, after all, a fabulous singer who seemed to embody everything noble about India’s artistic traditions. Serious and sober, without pretense or gimmickry, yet obviously and unashamedly passionate about his music and the religious devotion it expressed. The allusions to ‘controversy’ refer to a common perception of the man as a free sprit, arule-breaker, a rebel even. Uninterested in the parochialism of the gharanas (musical ‘households’), he looked instead for universal values. He was not afraid to offend by appearing to break the ‘rules’ of a raga, if he felt his interpretation represented its true spirit. He looked to broaden the horizons of classical music, creating new ragas on the basis of folk melodies, composing tirelessly and presenting innovative themed programmes. If this is controversy, one can’t help thinking, then let us have more of it.

The recital recorded and presented here epitomizes many of Kumar Gandharva’s qualities. The programme has been given a good deal of thought. It is varied and yet the items are all linked by a common theme. It demonstrates both the traditional sources of his music (for instance his singing a bhajan of Naamdev), and his creativity (six of the compositions are by Kumar Gandharva, and even two of the ragas are his own creations). The six ragas are grouped in three pairs, so that each pair features an unannounced change of raga, in the last case effectively between alap (in Bee had Bhairav) and bandish (in Gunakri). All this speaks of the man’s apparently limitless creativity, while the quality of the performances reassures us that these are not by any means shallow experiments.

Since the theme of the programmes was Bhairav Ke Prakaar (Varieties of Bhairav) the first and most extensive part of the performance is the rendition of Raga Bhairav itself. Bhairav is a well known raga but one not often heard in concert programme since its performance is limited to the morning. It uses the seven note scale given below in which particular emphasis is usually placed on Dha (6) and Re (2) the emphasis placed here on Pa (5) a the expense of Dha is an example of the artist’s unorthodox approach) the piece is a vilambit khyal set in slow tempo jhaptal.

Legends forever is a series of definitive albums from Sony BMG music that is a tribute to artists comprising the genius of Indian classical Music of the modern world. These are the doyens, whose repertorie amasses colossal proportions. Including the most talented vocalists and intrumentalists this collection salutes the stalwarts who have given the genre its current stature. What each artist has created belongs to the realm of the eternal traversing time and space for the indeed is the essence of art.

This series is therefore an attempt to introduce successive generations of musicians and enthusiasts to the richness of India’s musical legacy. It is to sustain a cultural wealth that exemplifies the artistic prosperity of India a land where music implies a way of life.

A legend is a marvel a prodigy. They also say tat a legend is a star. Bringing together the best of the best this series is in fact an entire constellation.

Legend forever is a series of definitive albums from Sony BMG Music that is a tribute to artists comprising the genius of Indian classical Music of the Modern world. These are the doyens whose repertoire amasses colossal proportions including the most talented vocalists and instrumentalists this collection salutes the stalwarts who given the genre its current stature.

A ground breaking genius he started to be called Kumar Gandharva because he was a child prodigy. The unique feature about the singing style of Kumar Gandharva was that he refused to be circumscribed by the specific tradition and rules of a Gharana. A true legend Gandharva is the god of Music in the Hindu tradition who enjoyed the phenomenal affection of music lovers.