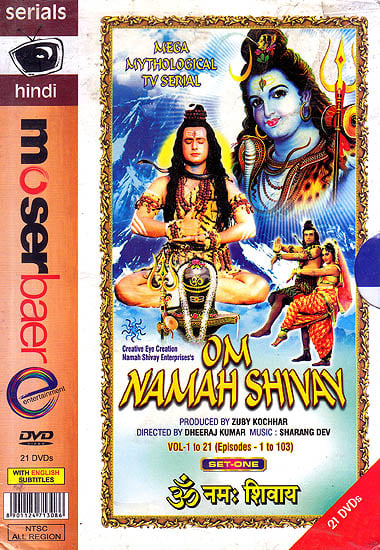 $225.00
Notify me when this item is available
Save to Wishlist Send as E-card Share by Email
About the DVDs

Lord Shiva is the real master of the existence that is India. Be it music or dance or line arts. Be it religion or faith or way of living Shiva is seen everywhere influencing it. Indian art and beauty has no meaning without Lord Shiva Each and every particle of India is echoing with the sound and vibration created by Lord Shiva in Vedic era Shiva is present. In Puranic prehistoric or historical times Shiva’s presence is inevitable the cultural aspects of Indian life is non existent without the inspiration of Shiva.

Shiva is the source fountain of National Physical, spiritual and human integrity of our nation. Indian identity is saved and maintained through thousands of years by the great influence of Lord Shiva.

There is no one character in the world history. Leave India apart which has influence people so greatly and made them culturally rich as Shiva. The name of Lord Shiva is unique in each and every respect. The TV serial Om Namah Shivay is a gratitude shown to this god of gods called Shiva. A great effort is put to make this serial an unforgettable experience in every Indian’s life.