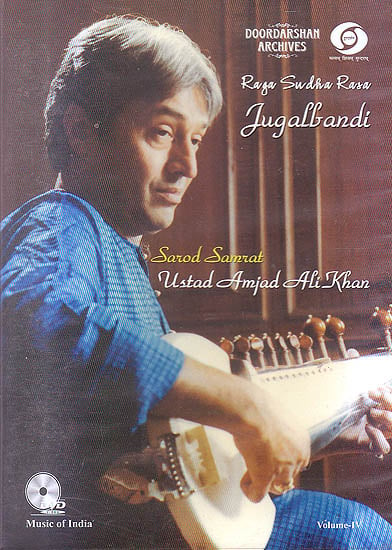 The nature of a jugatbandi is for two musicians to agree beforehand on the musical modes and time scales they will play in as a broad framework. Within that they are free to improvise as individuals and will most likely play together for a finale after taking turns playing as soloists for about an hour.

In the first section of this album, it appears as though Ustad Amjad Ali Khan takes his sarod to the north bank of the holy river Narmada which is the traditional boundary between the plains of North India and the peninsula of the South. Across the river, known as Rewa, the Laughing One, we behold an austere figure holding his violin downward against his chest.

It is Lalgudi Jayaraman, the violin wizard of Carnatic music. Look again: is he holding the exquisite Cremona, the Italian violin gifted him by Western violin maestro Yehudi Menuhin, who was overcome by his mastery and melody after hearing him play in the Edinburgh Music Festival, 1965.

Born in the lineage of an illustrious disciple of the saint-musician Thyagaraja, taught and raised, like Ustad Amjad All Khan, in a deeply musical atmosphere by his gifted father, V R Gopala Iyer, Lalgudi Jayaraman embodies the soul of Carnatic music. He reigns supreme in the musical aristocracy of the Carnatic world.

Starting his musical career at 12, he displayed an uncanny ability to adapt as an accompanist to the individual styles of the leading maestros in Carnatic music. This rich concert experience together with his own desire to give original expression to his own ferment of musical ideas made him rapidly evolve as a concert artiste in his own right. He began enchanting audiences as much with his technical brilliance as with his lyrical sensibility: a path trodden meanwhile in the North by Ustad Amjad Ali Khan. Lalgudi Jayaraman has now a formidable body of original compositions to his name: five kritis, 17 varnams and 31 tillanas, many of which are danced to by leading contemporary dancers of the Bharata Natyam style. His compositions are in Sanskrit, Telugu and Tamil, but of his oeuvre, he chiefly says, I choreograph music.’

His tone is liquid and mellifluous and in this jugalbandi, sounds extraordinarily beautiful with steel-and-velvet voice of the sarod. The violin and sarod together essay Raga Malkauns known across the Narmada as Raga Hindolam.

The name Malkauns (or Malkosh) is said by musicologists to derive from Malaya Kaushik, of the region of Malwa (Central India, where the Bangash clan settled). This meaningful old scale is mentioned in ancient treatises like Sarangadeva’s Sangeet Ratnakara. However, say musical pundits, despite the name, there is no structural similarity between the old Malaya Kaushik and the present-day Malkauns, which is guesstimated to be about 300 to 400 years old. The Carnatic Raga Hindolam is one of the assured foundational scales employed in teaching music as much as it is a superb vehicle for lofting the imagination and emotions to higher Levels of consciousness. Hindolam is assigned to the Mela or source raga of Natabhairavi in the Carnatic tradition.

Sahavaadan
Sarod and violin is a seldom heard combination. In this particular case it bridges the North/South divide. Violin has an endearing place in Carnatic Classical Music as Sarod has in Hindustani Music. Ustad Amajad Ali Khan on Sarod and Lalgudi Jayraman on violin playing together in this Sahvadan begin with a detailed Aalapana in Malkauns/Hindolam followed by a Madhya laya composition in Teentaal/Aadital with their respective accompanists constantly maintaining the tradition of their respective systems, adhering strictly to the technical aspects and at the same time complimenting each other. The Tani Aavartanam showcases the Tabla and Mridangam in solo and Jugalbandi sequences, before the duo proceed to the drut gat, the faster composition.

Raga Malkauns/Hindolam
Malkauns is one of the six original ragas as stated in ancient texts. It is a Late night melody of deep, peaceful and sublime character. This raga belongs to ‘Bhairavi That’ with Komal or flat Ga, Dha and Ni swaras. It is an Audav or Pentatonic raga since Rishabh and Pancham swaras are omitted in Aaroh and Avaroh i.e. both in ascending and descending order. Its Vadi is Madhyam and Samvadi Shadja. It has a deep and prayerful expression like its counterpart Hindolam of the Carnatic system. which is a Janya raga derived from the 20th mela Natbhairavi. Hindolam is also a pentatonic or Audav raga with Pancham and Rishabh as Varjya swaras. Rest of the swaras are exactly the same as in the Hindustani Malakauns. Hindolam is supposed to be the Gandhar Murchhana of Mohanam.

Raga Simhedra Madyaman
Simhendra Madhyamam is a melakarta rage of Carnatic music system belonging to the 20th chakra Disi. Disi-go is the mnemonic name of this raga. Re, Ga, Ma and Ni are the Jiva Swaras of this gamak pradhan Rakti raga. Simhendra madhyam is a Murchhna-karak mela in which Pancham taken as Shadja gives rise to Mayamalavgaula. This male-karta raga is Janak of more than twenty five Janya ragas. Surprisingly enough this raga is also prevalent in Hungarian and Gypsy music.

Although kin to Kirvani, there is no parallel of Simhendra madhyamam in Hindustani music but Ustad Amjad Ali Khan seems quite comfortable and at ease in dealing with the rage along with Shri Lalgudi Jayaraman in a composition set to ten beats cycle of Jhaptaal. The album concludes with a melodious Dhun in Khamaj/Khamas set to the lilting rhythm of Dadara Taal.

Raga Khamaj
Khamaj is a popular rage of lighter flirtatious temperament mostly used for light classical genre like Thumri Dadra or Dhun. It is the Aashray raga of ‘Khamej That’ with both the Nishads, The shuddha nishad is used in Aaroh and komal or flat Nishad is used in Avaroh. It omits Rishabh in the ascending order therefore its Jati is Shadav- Sempoorna. The sonant or Vadi swara is Gandhar and the consonant or Samvadi swera is Nishad. It is sung or played in the first quarter of the night.

Khamas in Carnatic system is a Vakra Shadav Sampoorna rage derived from the 28th mela Harikambhoji. It is a Deshiya raga which can be sung or played at any time. It is a well distributed raga used for portraying Shringaar and Bhakti Rasa. Originally Khamas was an Upanga raga. It is only with the advent of Javalis and later com positions that Bhashanga type of Khamas came into prominence.