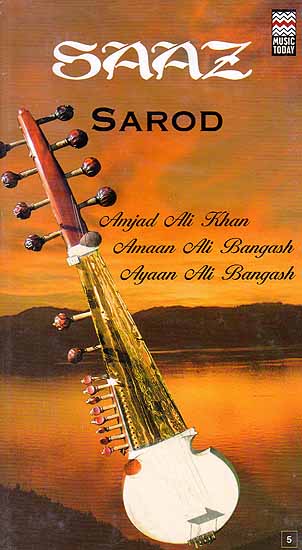 The name sarod is linked to the Arabic Sahrood or Persian sarood meaning music as well as the Sanskrit shorode (good Noise). It is believed that the most significant predecessor of the modern sarod is the Afghan rabab which some say was brought into India by Mohammad Hashmi Khan of Bangash Afghanistan Some 300 years ago.

The exposure of his grandson Ghulam Ali Khan and his conemporaries Niyamatullah and Enayet Ali (from two other distinct rababiya families of Afghan origins) to the gayaki (vocal music) style of Gwalior as well as to the dhrupad style of Tansen’s Senia gharana must have influenced them to improve the rabab into one capable of executing the meends (slides) and curves necessary in the gayaki style. One (Or more) of these three is credited with the idea of modifying the Afghan rabab b y adding a metal fingerboard and metallic strings and thus the sarod was born.

The modern sarod is hand carved from a single block of wood with a fretless steel fingerboard ending at the round head which is covered in goatskin and has a relatively large resonating chamber. It has 4 main (melody) strings 2-4 that strings tuned to the raga being played 2-4 chikari (rhythm) strings produce the notes which are changed by pressing the strings on the fingerboard using the other hand’s fingers.

Padma Vibushan Ustad Amjad Ali Khan is among those exponents of Indian classical music who are born into their art. One of India’s foremost classical musicians and an acknowledged master of his chosen instrument the sarod he shoulders the sixth generation inheritance of the Senia Bangesh gharana which traces its roots to the great Mian Tansen.

Ustad Amjad Ali Khan’s forays into the world of contemporary music include a piece for the Hong Kong Philharmonic Orchestra and the signature tune for the 48th international film festival. By visiting Pakistan in 1981 he became to the cause of popularizing Indian classical music through his performances and lecture demonstrations.

Aman Ali Bangash is the elder son and disciple of the sarod maestro Ustad Amjad Ali Khan. He has traveled the globe giving concerts solos as well as with his father and younger brother. He has collaborated with international artists like pianist Dominique Brasthassat and percussionist Jean Bruno Mier and has over ten recordings including five solos and others with his father.

Besides playing the sarod Amaan co-authored a book on his father’s life with his brother Ayaan and anchored Top Drive a television series on Star world. his musical score for Oscar-winning director Roger Christian’s movie American Daylight was released recently.

The younger son of virtuoso Ustad Amjad Ali Khan Ayaan represents the seventh generation in the famous senia Bangash school. He entered the sphere of public performances at the age of eight and has reached legendary domains like the Carnegie hall and the Barbican Centre. Ayaan and his brother Amaan are the first ever classical musicians to host Zee TV’s Sa Re Ga Ma the biggest musical show in the world.

Ayaan’s execution of ragas displays clarity consistency and his technical mastery over the instrument. His obvious achievements and contributions have earned for him the Best Budding artist of the year award from the Prime Minister himself.

In Indian classical music, the measure of an instrument’s acceptability into the classical arena has traditionally been the extent to which it can imitate vocal music, in all its intricacies and nuances. Over the years, the Indian musical genius has produced musical wonders - instruments that are matchless throughout the world in terms of their sound quality, their intricacy, their mechanics, their verisimilitude to the human voice, and most importantly, the depth of emotion they are capable of stirring in the listeners.

His series showcases just such melodic marvels: eight of the most popular and fascinating Hindustani classical instruments from India’s musical treasure-chest, Saaz (the Urdu word for a musical instrument) brings together some of the finest classical instrumental renditions by acknowledged masters. Each double volume album thus gives a glimpse of the multitude of styles in which the instrument is played.