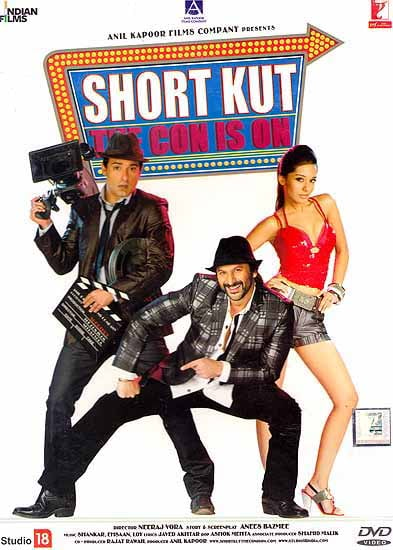 $17.50
Notify me when this item is available
Save to Wishlist Send as E-card Share by Email
From the DVD

Short Kut is a heart-warming, young slice-of-life comedy about the trials and tribulations of two con artists, a struggling director and actor and the zany situations they face in the pursuit of their tinsel-town dreams!

The film revolves around 2 principal characters Shekhar (Akshaye Khanna) a struggling assistant director/scriptwriter and Raju (Arshad Warsi), a struggling junior artist. As luck would have it, Raju manages to steal Shekhar’s prized script and catapults to super stardom. Following this Shekhar plunges into a phase of self-pity owing to which his wife Mansi (Amrita Rao) also leaves him! Shattered, Shekhar is now looking for his one chance to get even with Raju.

What follows is a hilarious tale of con, deceit, super-stardom and subsequent fall. Shot in picturesque Bangkok, and featuring Amrita Rao make-over into a hot bombshell, Short Kut comes with a generous does of laughs as well as emotions that will pull your heart strings and keep you glued to your seat!

Dual layer format: Layer transition may trigger a slight pause; Some players may not be able to access all features
Digital Dolby 5.1 Sound
NTSC Format – All Regions