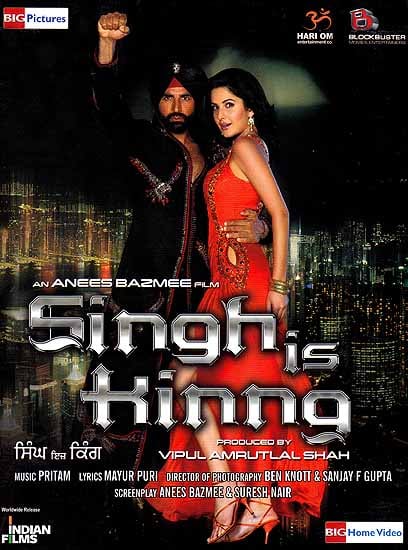 2008’s biggest Blockbuster, Singh Is Kinng, revolves around a gang of crooks transformed by a good man and his selfless love for a pretty girl…
Lakhan Singh aka Lucky (Sonu Sood) is the ‘kinng’ of the Australian underworld accompanied by his associates. Far away, in a small village in Punjab, where Lucky was born, there exists someone more notorious than him-Happy Singh (Akshay Kumar). The village is fed up of his magnanimity, which has resulted in a number of riotously disastrous situations. Out of desperation, they decide to send him on a long trip (that will keep him out of the village for a while!) to bring Lucky back to Punjab, as his despicable deeds were maligning their image in Australia.

The series of chaos; shocks and comic misunderstandings that ensue eventually result in redemption and an accidental wedding!

It comes from Vipul Shah and Anees Bazmee, the master-makers of blockbusters like Aankhe, Waqt, Namastey London, No Entry and Welcome.