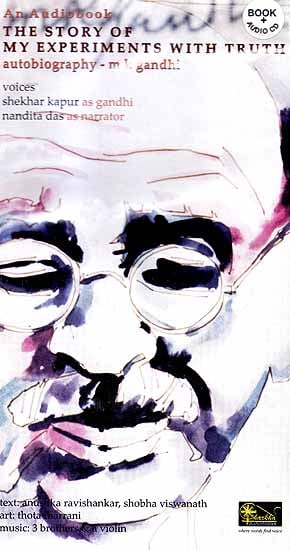 The Story of My Experiments with Truth Autobiography - M K Gandhi (Audio CD with Book): An Audiobook

Mohandas Karamchand Gandhi inspired the spiritual and political souls of millions of people. His concept of non-violent resistance propelled numerous struggles throughout the world. Written after his release from prison, first published in English in 1927, The Story Of My Experiments With Truth is Gandhi’s autobiography, documenting his spiritual journey amidst the political strife of his times. Rendered as an abridged audiobook and textured with songs and background score, this presentation seeks to inspire minds and hearts all over the world.

Best known for his Oscar nominated film “Elizabeth”, film maker and actor Shekhar Kapur is the voice of Gandhi. His powerful yet evocative portrayal, captures the magnificence that was the life and is the spirit of Gandhi.

Nandita Das is one of India’s finest actors. In a splendid narrative that provides a backdrop to Gandhi’s life, she infuses passion and allows us a deeper understanding of the Father of the Indian nation.