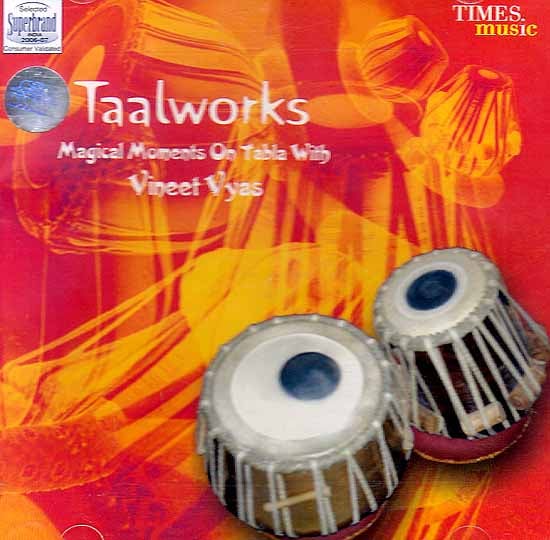 The tabla are the drums from North India and are an integral part of all facets of classical music and dance. They have immense versatility an incredible range of sounds and a vast repertoire. I have been very lucky to have studied this art form under one of India’s greatest tabla maestro’s Padma Vibhushan Pt. Kishan Maharaj and only through his Aashirvaad has this album come to light. I have studied the art of tabla for the past 20 years and form my travels in India Canada and across the globe I have been inspired by the interest of audiences to present the elements of a traditional tabla solo recital in a modern format. I am thrilled to offer you samples of the tabla’s vast potential and depth with new and interesting melodic textures.

In the Beginning (Uthaan) – This piece is inspired by the Benared Gharans of tabla playing and in particular by my guru Pandit Kishan Maharaj. It is uthaan the opening movement of a tabla recital and guruji famous for his powerful execution of this element (it is said that the prowess of a tabla player is evident from the opening uthaan). The melody is based on Raga Sohini a very deep and moving evening melody that has the power to immediately capture the listener’s attention. This piece is set to a rhythmic cycle of sixteen beats known as teentaal and features numerous improvised tihasis.

Revelations (Peshkaar) - A Peshkaar is an opening progression in which a small rhythmic pattern is slowly developed and expanded and different syllables are gradually integrated. This peshkaar is teentaal and features Raga Kalavati a beautiful and enchanting evening melody.

Benares Dawns on Me (Kayda) - As a young boy studying tables in Benares I would often walk along the ghats of the Ganga River where so many Hindus come to wash away their sins. Amidst the clamor of street sellers, sadhus local inhabitants and foreigner there is always an underlying sense of peace of Shanti on this river. In this piece I attempt to capture both the spirit of the Benares Style of Tabla playing as well as this unique blend of everyday commotion and mysticism. Set to Raga Bhoopali.

Chalan - Raga Charukesi Provides the melodic backdrop to this exposition of moving within an eight beat cycle by playing different groups of rhythmic Syllables some seven sixes and many extempore variations. This track goes out to all our friends at Real World especially Sir Peter Gabrie!.

Epiphany (Angusthaana) - Set to rhythmic cycle of seven beats this is a lively and uplifting piece. It features angusthana literally translated as finger movement in which the fingers are floating like waves over the right hand tabla while the left hand is doing a balancing act.

Bring on the Rain - In this piece I have attempted to depict the many moods of the Indian monsoon season. During the monsoons one experiences different rhythms of the rain a light and misty sky may suddenly erupt with explosive and torrential rains as dark thunderous clouds move in and lighting strikes. The melody is based on the seasonal Raga Malhar.

Moonlight - this piece exemplifies the beauty of music where 2 different styles of musicians and music meet. David Braid improvises on piano over Beethoven’s famous moonlight Sonata melody and I join a with improvisation on tabla. This recording is a result of our first meeting in which musical possibilities have come alive through the essence of improvisation.

Flight of the Swan - Adapted From the Swan by Saint Saens in this piece the tabla portrays the images of the swan an elegant being that is often featured in Indian mythology. The beginning of the song depicts the calm and serene beauty of a swan floating on the lake. Gradually there is a build in energy as the swan flutters and paddles in preparation for flight eventually the swan lands and a sense of calm returns.

In the Darbar (Rela, Upaj, Tukre) - This is a traditional finale to a tabla solo recital. Set to Raga Jog this piece features a rela which is the fast execution of a specific small ‘bol’ or syllable pattern. There is also padhant or recitation elements of Upaj or improvisation and many unique and priceless compositions which are likened to jewels in a tabla player’s treasure chest. I have concluded with a composition by the founder of the Benares Gharana Pandit Ram Sahai.

• My Guru Pandit Kishan Maharaj for blessing me with a glimpse of his vast knowledge and wisdom. It has been my great fortune to have his guidance and blessings.
• My parents Vijaya and Brij Vyas and my brothers Varun and Amit for their continued support and love throughout my journey
• The Canada council for the arts and the Ontario arts council for their support
• Pt. Puran Maharaj for his wisdom and guidance and for teaching me many compositions some of which are performed on this album.
• Sukhvinder Singh Namdhari (Pinky Bhayya) For his unconditional help love, teachings and inspiration upon my arrival in Benared in 1986 and in the years which have followed.
• George Koller Steve Oda, Ajay Prasanna, Murad Ali, David Braid, Ron Allen, Denise Djokic, Lokesh Dhawan, Kevin Doyle, Alix Bonenfant and Shaun Gratto.
A special thanks to my Tauji: Dr. Anand Prakash Vyas and his family for their continued support throughout all my journeys to India as well as to my Buaji: Suprabha Vyas Uncle and Aunty Verma, Aditya and Lavanya, Sanjay Verma, Joy and Dominique Chitralekha Pushkarna, Saurav and Suneet Lakhanpal Suresh Mangal, Kiran Ahluwalia, Jahanara Akhlaq Bob Becker, james Kippen, Andy Maize Pushpa Oda Geoff D’Eon Tarun Nayar, Rohan Fernando, Yuri Koller Imtiaz Khan Cheb I Sabbah.

• A special thanks goes to my wife and friend Bageshree – if it wasn’t for her love and persistence this album would never have reached completion or Times Music India.
This album is dedicated to the late Pandit Brahmanad Vyas and Akshaya Devi Vyas – your spirit and sacrifice have made my life in music possible.