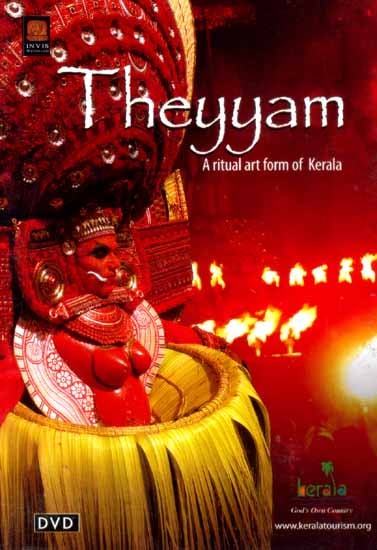 $22.00
FREE Delivery
Quantity
Ships in 1-3 days
Notify me when this item is available
About the DVD

The DVD on Theyyam from Invis Multimedia features myriad forms of the Theyyam and the ritualistic performances to appease godly powers, believed to bring peace and prosperity to the people.

Theyyam is an integral part of Kerala’s rich heritage of indigenous arts and culture. It is an embodiment of the primeval quest of human beings to give form and shape to the concept of god. A living cult with roots deep in the soil of Malabar, it echoes the customs and traditions, hopes and aspirations, and the trials and tribulations of a people who have lived in this land for centuries.

Theyyam is an ancient ritualistic dance form, which originated in North Kerala or Malabar especially in the districts of Kannur and Kasaragod. This region was part of the princely state of erstwhile Kolathunadu.

The word Theyyam is believed to have been evolved from the word Daivam, which means God in Malayalam language. It is deeply rooted in ancient tribal cultures, which attach great importance to the worship of heroes and the spirits of ancestors. This ritual art form is an integral part of the people of Malabar and is usually performed in front of the village shrines and also in the premises of ancestral houses. The benediction given by Theyyam in its frenzied trance is believed to be received from the God or Goddess in person. With its unique mix of dance, music and mime Theyyam influences the local society profoundly.

Over 400 Theyyams are performed in Kerala. Of these Raktha Chamundi, Kari Chamundi, Muchilottu Bhagavathi, Wayanadu Kulaveni, Gulikan and Pottan are the most spectacular. Spectacular headgear and other ornamental decorations give Theyyam an awe-inspiring grandeur. The costumes and facial makeup differs from one form of Theyyam to the other. Rice powder, turmeric, vermilion, ink and other natural ingredients are used for painting the face. Native artistes skillfully craft the costumes and headgear from nature’s own resources like bamboo, areca nut palm spathes and silk.

Annual Theyyam performances are called Kaliyattam. Perungaliyattam, a congregation of Theyyams held once in few years is an effort to keep an age-old ritual alive.