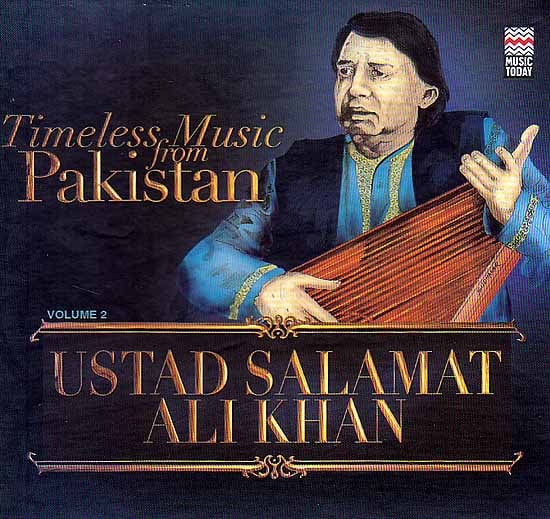 Widely regarded by fellow musicians and connoisseurs as one the greatest vocalist of the 20th century Salamat Ali Khan Achieved worldwide acclaim for his command over Khayal singing.

Ustad Salamat Ali Khan along with his brother Ustad Nazakat Ali Khan, received training in classical music from their father Ustad Vilayat Ali Khan the expert of Sham Chaurasi Gharana which is a very old dhrupad gharana going back nearly 500 years. Salamat Ali was merely seven years old at that time but only two year later he gave his first public performance with his brother at the prestigious Harballabh Mela in 1941.

Following a smashing debut the duo started giving regular broadcasts from All India Radio Lahore and gave numerous performances in India and Pakistan. It was particularly Salamat Ali who drew attention with his unsurpassed layakari or rhythmic interplay which was considered to be his forte. The alaap part of his singing was heavily oriented towards the dhrupad style and would cast a surreal spell on listeners. His behlawas were characterized by the way in which he embellished each musical note to enhance the poetic content of the bandish presenting the beautiful aspect of music. In addition to layakari Salamat was renowned for his command over taan patters of which the chhoot and sapat were considered his specialty.

A glorious career Spanning over six decades came to an end in July 2001 with his sudden demise. He has been a major influence in the popularization of classical music.

This album is a celebration of the legendary Ustad Salamat Ali Khan who has been an outstanding phenomenon in the history of classical music and one of the greatest exponents of the Shamchaurasi gharana style of singing form Pakistan.

This series presents unsurpassed legends of classical and Semi classical music who mastered the art through their exceptional vocal abilities. It is an attempt to celebrate the glorious journey of some such legends including Roshanara Begum Ustad Salamat Ali Khan Ustad Fateh Ali Khan, Ustad Umrao Bundu Khan, Ustad Ghulam Hassan Shagan Khan and Ustad Amanat Ali Khan. These artistes have made a monumental contribution in popularizing classical music making way for all future generation to tread the path of artistic brilliance and honor.