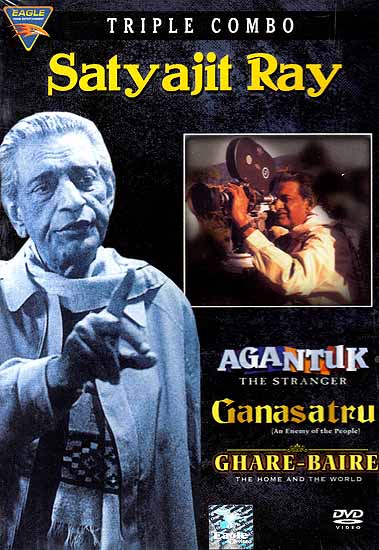 When the movie opens, a woman is recalling the events that molded her perspective on the world. Years ago, her husband, a wealthy Western – educated landowner, challenged tradition by providing her with schooling and inviting her out of the seclusion in which married women were kept, to the consternation of more conservative relatives. Meeting her husbands visiting friend from college, a leader of an economic rebellion against the British, she takes up his political cause, despite her husbands warnings. As the story progresses, the relationship between the woman and the visitor becomes more than platonic, and the political battles, pitting rich against poor and Hindu against Moslem, turn out not to be quite as simple as she had first thought.

Legendary Indian film director Satyajit Ray developed this project based on a classic play by Henryk Ibsen because his doctor wanted him to only shoot films in a studio. The story has been transferred to Bengal, and Bengali is the language used in the film. In the story, Dr. Ashoke Gupta (Soumitra Chatterji) is an idealistic doctor working in a town near Calcutta. He discovers that the water at a popular temple is the source of an outbreak of typhoid and hepatitis. In order to save lives, he risks his career to try and call attention to this polluted water source. His efforts are thwarted by a local group of building contractors, who attempt to discredit him in various ways. Despite that, Dr. Gupta has supporters, and a reporter from Calcutta offers to tell his story in the papers there. Clarke fountain, All Movie Guide.

An well – off Indian family is paid an unexpected, and rather unwanted visit by a man claiming to be the woman’s long lost uncle. The initial suspicion with which they greet the man slowly dissolves as he regales them with stories of his travels tales that are at odd with their conventional middle class perspective on the world.