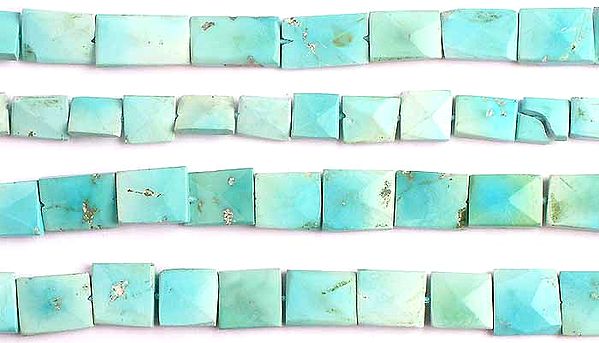 $60.00
Ships in 1-3 days
Notify me when this item is available
Save to Wishlist Send as E-card Share by Email
In the jewelry of Tibetan peoples, turquoise (Nepalese: tuto; Tibetan: yu) is visually the most outstanding material and distinguishes Tibetans readily from their neighbors who use turquoise only sparingly or not at all. The main source of this stone has been the Tibetan plateau. In Tibet, turquoise has been in use since ancient times: in the regalia of the first Tibetan kings; as propitiatory offerings to gods and demons; and as a tribute to other nations. Never having lost its prominent place in precious jewelry, it is still worn by the Lhasa nobility. For the Tibeto-Nepalese, who have imported most of their jewelry from Tibet, turquoise occupies a similarly important place.

Various beliefs about turquoise are shared by Tibetans and Tibeto-Nepalese. In many Asian societies the color blue is considered auspicious and protective; blue turquoise, therefore, possesses these qualities. Worn in a ring, it assures a safe journey; worn in the ear it prevents reincarnation as a donkey; appearing in a dream, it is auspicious; when found, it brings the best of luck and gives new life (in contrast, it is not considered lucky to find gold or coral); when changing its color to green, it indicates hepatitis, yet at the same time it draws out jaundice. Most importantly it can absorb sin. Strings of prayer beads should include turquoise. In fact, when worshipping the popular goddess Tara in her green form, because of the color association, it is desirable to do so with a rosary entirely composed of turquoise beads.

There exists as well the concept of living and dead turquoise. Living turquoise has a healthy blue color, whereas dead turquoise has turned either white or black. In the natural aging process of turquoise, exposure to light and body oils darkens the color, eventually turning it black. Tibetans compare this to human aging and death. Wearing "living" turquoise is therefore very desirable, as it will give long life to the wearer.

In general terms turquoise is a symbol of the blue of the sea and the sky. Infinity in the sky speaks of the limitless heights of ascension. The stone is opaque as the earth, yet it lifts the spirit high, laying bare to us the wisdom of both the earth and the sky. It is old, yet young.

Turquoise has also been held as a sacred stone by ancient cultures other than the Tibetan. It was sacred in Egypt along with malachite and lapis lazuli. It was sacred to the Persian culture, where it symbolized purity. American Indians believe it to be a protector and guardian of the body and soul. Gypsies wear this stone in their navels, believing it to be good for everything.