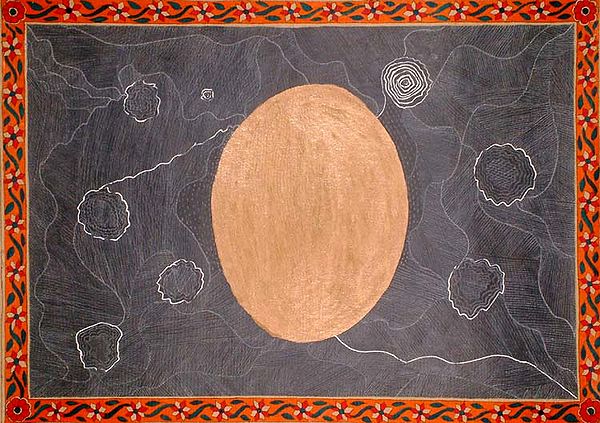 £93.75
Notify me when this item is available
Save to Wishlist Send as E-card Share by Email
Madhubani art is a wonderful combination of simplicity and serenity and a symbol of the cultural attainments of society.

That the Madhubani village is in touch with cosmic phenomenon is evident from this painting which conveys more than it shows. There are various speculations regarding the origin of man and the story of creation. As painted by the Madhubani artist, a golden egg was produced in the causal boundless waters, from which came forth the lord of progeny, Prajapati. From him was born a daughter, Saraswati and also the hymns Savitri, Gayatri and twilight Sandhya, according to the Matsya Purana. The Markandya Purana adds that 'as the Golden Embryo, Brahma is the first among the gods. He has no beginning; he dwells in the centre of the earth's lotus.'

The artist conveys his knowledge about the cosmic order in this simple painting in which the cosmic milieu is grey with linear patterns in white, giving it an ethereal effect. The luminous golden egg is painted in shining golden colour relaying its importance. The painting would have been incomplete without the characteristic bright colours of Madhubani which the artist has used in the border.