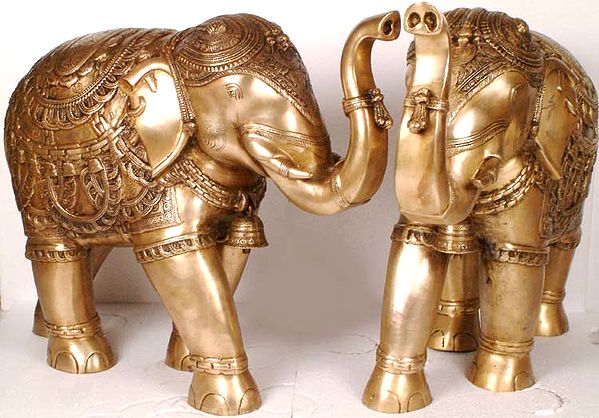 Free delivery
The elephant is India's legend. It is a myth and as much a reality. It is simply difficult to think of India without elephant. Ancient scriptures do not portray the elephant as an independent theme, but her entire past and the body of her entire literature, the sectarian as well as secular, right since the Epic days, echo with a number of elephant legends in one form or the other. The Indus people, as well as the Vedic sages, it seems, did not have a preference for elephant. Excavations at the Indus sites revealed nothing that depicted elephant's link with the Indus man. There obviously could not be a place for an elephant like animal in the type of city life that defined the Indus culture. In the dairy dominated culture of the Vedic days, too, elephant could hardly have a role. The Vedas have mentions of elephant but only as a moody unfriendly animal that unprovoked destroyed ashramas of rishis. The Vedic rishis had cow, horse or even serpent related rituals but they by and large evaded elephant taming or befriending.

By the time of the Puranas, the elephant acquired the status of the highest auspicious beings and in the matter of auspices even excelled the cow, which enjoyed the status of the most sacred of all animals and was worshipped as a deity. The cow was yet the most sacred of all animals but not as auspicious as the elephant. Whatever the related legends, it was largely in consideration of elephant's auspicious bearing that when looking for a head to graft on the torso of Ganesh, the god of auspices, the divinities chose an elephant head. And, after Lord Ganesh, the son of Parvati and Shiva, had his torso transplanted with such head, people began worshipping not only Gajanana, the elephant headed Ganesh, but also the elephant as an animal. It was with the Ganesh legend that the elephant was deified.

Elephant related legends are innumerable. Airavata, the milk white elephant, was one of the fourteen jewels obtained by churning ocean. It was acquired by Indra, the king of gods and ever since has been an inseparable part of his identity and iconography, and what of minor gods, even Lord Vishnu was one of them who envied Indra for his elephant. Airavata was not only his vehicle but also an invaluable asset. Indra realised his folly and also that Krishna was no one else but Vishnu, after he had lifted the mount Govardhana and held it for seven days on his little finger to protect peoples and cows of Vraja from Indra's wrath. The subdued Indra, leaving Airavata at Vrandavana's outskirts, rushed to Krishna to propitiate him, but did not succeed in his efforts. Finally, Airavata came to the rescue of his master. It reached Lord Krishna but before making a prayer bathed the lord of cows by sprinkling on him fresh milk from within it. This so much pleased him that he pardoned Indra for his impertinence.

The mythology of Lakshmi and Vishnu is not bereft of elephant legend. In mythical tradition, Lakshmi even developed an elephant related form known as Gajalakshmi, an epithet she acquired as it were only the elephants that always bathed her by sprinkling water on her. One of the feats, for which Lord Vishnu is best known, relates to rescuing an elephant from a crocodile. The episode, widely known in Indian mythology as Gajendra-moksha, depicts how, when called for help, the benevolent Vishnu rushed and rescued the innocent animal. A zoological miracle, the massive sized animal elephant lives on pure vegetable diet and it is perhaps for such reasons that it has greatly suited the Jain and Buddhist cults. Exactly before Jain Tirthankara Mahavira was born, his mother Trisala perceived in her dream a chain of Airavata type white elephants. The auspicious dream was a precursor of a great divine birth. As the Jain tradition has it, after his Enlightenment, Lord Mahavira, before he entered the Samavasarana, was bathed by elephants. It is almost the same in Buddhist cult. When Mayadevi, the wife of king Suddhodana, the Sakya king of Kapilavastu, conceived Buddha, she dreamt that a baby elephant descended from the sky and, after circumambulating her three times, entered her womb.

The simple innocent animal was many a time exploited by wicked minds for their wicked designs and was much misused. It was the elephant form that the demon Gaya entered into. When this elephant demon Gaya inflicted all kinds of cruelties on the inhabitants of Varanasi, Lord Shiva had to come to their rescue. He killed the demon, flayed his skin and wore it around him. This gave him Gajantaka as one of his epithets. Kansa, the demon king of Mathura, got his elephant Kubalyapitha to accomplish wicked things and posted it on the main entrance to kill Krishna and Balarama when they entered it. Krishna foresaw the design of Kansa and killed the demon Kubalyapitha. Devadatta, a cousin of Lord Buddha, was highly jealous of him. In an effort to kill him, he intoxicated an elephant and, when it turned mad, charged it on him. But, such was Buddha's spiritual power that the elephant turned back without harming him. As one of Nanak's Janam-sakhis has it, the opponents of the Sikh Guru once let an elephant loose at him but the moment the elephant looked into his eyes, it put its trunk at his feet and returned.

The worst of misusing an elephant occurred during the Great War Mahabharata. Dronacharya, in command of Kauravas' army at the Great War, had become invincible and so was his son Ashvatthama. Krishna knew that till Dronacharya lived, Pandavas would not be able to defeat Kauravas and also that he would not die unless he heard of the death of his son Ashvatthama. The Kauravas had an elephant by the name of Ashvatthama. He asked Bhimasen to kill the elephant and persuaded Yudhisthara to announce its death before Dronacharya in such a way that he mistook it for the death of his son. Hence, as soon as the elephant Ashvatthama was killed, Yudhisthara announced loud enough to let his words fall into the ears of Dronacharya- 'Ashvatthama maro, naroba kunjaroba', that is, Ashvatthama has died, the man or the elephant.

In feudal India, the elephant was the apex of the status of a ruler. The number of elephants that a king had in his army determined his status and strength. Mughals were almost mad for Indian elephants and maintained a large number of them in their stable. In his township of Fatehpur Sikri Akbar had made special provision for stationing his favourite elephant just in the foyer of his Diwan-i-Khas. Shahjahan, the builder of Tajmahal, always loved to ride an elephant. Due to its auspicious bearing, the elephant motifs passed into the realm of architecture and a castle's or a fort's main entrance began having elephant statues flanking it and was often called Hathiapaur, or the elephant lobby. The field of painting was also not bereft of the elephant impact. The miniatures of medieval India came out with concepts like Nari-kunjara and Pasukunjara, the one arriving at an elephant form using multiple woman figures and the other by using those of animals. The organisers of the 1982 Asiad Games had discovered the shubhanka, or the emblem of the event, name Appu, in an elephant form.

These excellent brass-pieces, representing a pair of elephants, exactly identical, depict on the one hand this great massive tradition of elephant related myths, legends and auspices, and on the other, two finest jewels, which a jeweler could carve only in gold like delicate metal. A divine composure and celestial calm define the faces of this mythical animal. Each of them has been saddled with Mughalia grandeur and taste. The adornment, consisting of various kinds of ornaments, the frills of bells in particular, is simply superb. Every motif and design has been carved with a jeweler's finess and finish. The ornamentation does not restrict to only head and back but extends to feet, trunk and tusk. The ears have on them large karna-phools, the ornaments with flower-like shape and the tusks, rings with multiple coils. The trunk has a gold frill towards its end and a beautiful ornament on its upper side. The head dress is unique in its splendour, lustre and details. Two oval loops flank on both sides towards the ears and an angular one, in the centre, descends down the trunk. The central one has superimposed on it a large rib type ornament, consisting of gold and beautiful details, and two banana-flower type motifs on side loops. A couple of chains suspend from their necks and terminate with a large bell below. The saddle is another most elaborate feature of their ornamentation. It covers almost the entire upper part and the hips of the animals. The ornamentation goes down the feet, which have been adorned with beautiful girdles around them.