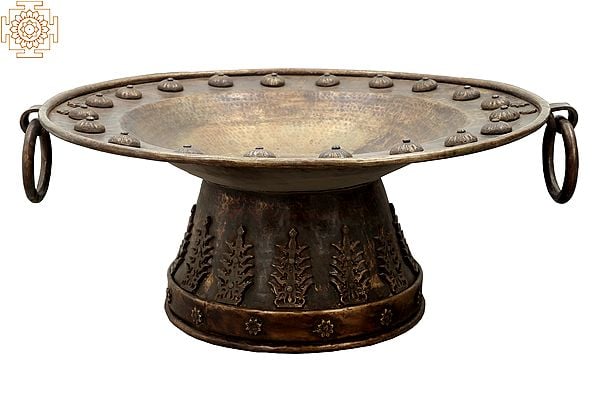 A traditional cookware and a symbol of wealth, Urli or Uruli were used initially for cooking food at home or in ayurveda to make medicines. Now as the times have passed and with the coming up of various replacements, Urli is used more as a decorative showpiece, either placed just like that or generally filled with water and floating flowers and candles as a part of South Indian tradition; commonly made of clay, copper and bronze, but the one show here of brass, is now-a-days marked as trendy and the most gracious one.

The large Urli shown here is moulded in an unusual and a superbly exclusive style having a thick round base with its circumference decreasing as it ascends, controlled by an extensive round plate that is a bit hollow from the centre to shape it like a bowl, two ears like rings on both sides are the solid handles for movement. As you look carefully you will be intrigued by the elegant bush motifs on base and symmetric popped-up circles on the brim.

Urli, although is a unique decoration for house, but it also holds a great significance in vastu as a water element (filled with water), facing the main door or kept in puja room for wealth and prosperity.

More than 1M+ customers worldwide
33 inches Width includes Handles, Without Handles the Diameter is 30 inches.
Add a review
Have A Question