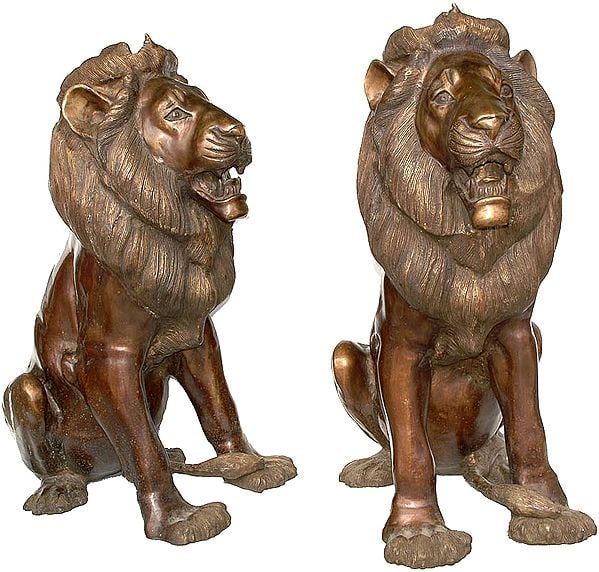 Free delivery
The two majestic lions, both male, that these brass statues represent, except that both have an identical anatomy, facial bearing, grace, robust figure and seating posture and are identically cast in a pair form such as are usually modeled for adorning a symmetrically divided space, as the two sides of a portal or entrance to a palatial building, or the foot of a stair-case leading to a temple or to upper chambers in an ethnic haveli, the conventionalized detached figures, not linked with each other, are one of the rarest species of large tawny flesh-eating cat-like looking animal, only a few hundred of them now surviving in India, most of them in the Giri forest of Gujarat province. Now one of the endangered species, more so those white ones from Giri forest which these statues represent, lion has been the monarch of forest over millenniums.

Obviously a stylized form, the king of forest has been portrayed as seated with its straightened forelegs, hind ones, folded and collected under the hips and tail secured in between the legs, a position which reveals its readiness to charge at its prey and is a characteristic posture that all hunting animals, a dog in especial, take to. A humanized face with deep penetrating eyes and a normally shaped nose, open mouth with elegantly turned lower lip and well set teeth except the awful fangs, well trimmed moustaches and mane and alert ears, the figures of the lions are simply lovable.

A large lion statue or a tiny icon, used for ages for decorating a space or as children’s plaything, reflects the men’s passion for taming this awe-inspiring animal and ruling it even as a lifeless replica – sculpted, cast or structured. Even a great monarch like the Mughal emperor Akbar was not beyond such weakness. Akbar, to whom mightiest of kings bowed in subordination, might have seen reason to feel proud in getting portrayed in a miniature painting as two lion-figures flanking him and his hands placed on the animals’ heads. All medieval rulers loved getting painted or photographed with a lion figure, and even its dead body was treated in the entire feudal world since times immemorial as a trophy for one’s rare act of bravery. By its association lion endowed anyone with superhuman power. When king Dushyanta – the hero of the ‘Abhijnana Shakuntalam’, the timeless classic by the second century Sanskrit poet Kalidasa, finds a child playing with cubs of a lioness, resting a little away, he does not fail to identify in him his son and feels that Shakuntala should also be around.

Perhaps utmost ferocious, even its mental image inspiring awe, the rock-shelter dwellers feared even a lion’s drawing on their rock’s wall, a fear-psychology that seems to have continued in Indus settlements as in Indus terracottas too, a lion-like figure is rarely seen. Jain Tirthankara Mahavira’s principle of non-violence and Buddha’s compassion for all living beings inspired Emperor Ashok, in the third century BC, to prohibit violence against all animals. The columns that he erected for promulgating his edicts had animal capitals, the lion-capital being the most majestic of all and is now Indian Government’s emblem authenticating all her papers including currency. Since third century onwards lion has been a regular theme of Indian art. A lion image was carved on pedestals of the images of Mahavira, the last Jain Tirthankara. Indian architecture used the theme more vividly and effectively. The twelfth century Sun temple at Konark in Orissa, rendered in the style of ‘ratha’ – chariot, uses lion statues, not horses or elephants, for drawing it. Not only those of divinities, even rulers preferred a throne to have lions as its legs. Duly respecting its authority the lion’s skin was worn only by Lord Shiva, and was used as vehicle, only by his consort Parvati in her various manifestations.