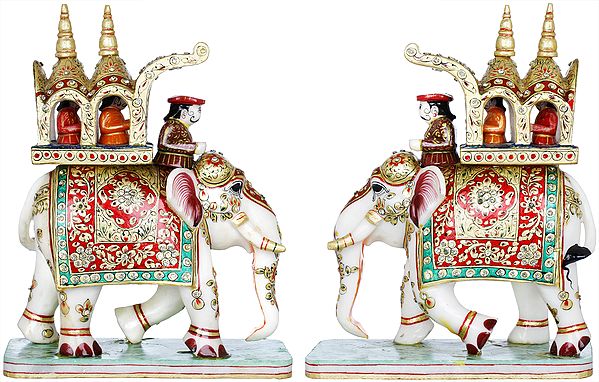 Elephants are the most graceful, strongest and biggest distinctive creatures on this planet; revered in religion as well as for their prowess in war. White elephants visible on this page are considered as a royal symbol in Thailand as they are used in royal ceremonies, kitted out in colorful outfits and painted in fulsome floral patterns to highlight their royalty.

This sculpture of esteemed elephants is depicted as carrying royal palki on their backs with two Maharajas each sitting in either of the palkis and Mahouts (one who rides an elephant) directing the elephants. These white creatures as vahanas, reveal about royal status of the kings and are seen to be incredibly lucky. The tilted legs and the swaying tail convey the direction of their movement.

The elephants are exorbitantly attired, inspired by meenakari patterns and stone studded; red striations of the swinging ears, baubled patterns on the body with marvelous trunk and the palki topped with long conical structures is a treat to the eyes. The shade of the tusks compliments the color of the flowered motifs; curvature of eyes is awe-striking with an intense yet soft expression of confidence; Carved on tri-colored pedestals reflecting green grassy top is a best buy to accentuate the beauty of the place with their aura and uniqueness.