$280
For the passionate devotee of Devi Kali, this bracelet is a must-buy. Smithed from sterling silver, it comprises of a symmetrical series of embossed silver plates. They are interconnected with miniscule silver loops, and lead up to the central plate which is embossed with a distinct Mother Kali figure. From the highly characteristic features of Her iconography (the decapitated head in Her hand, the crown on Her head), one may deduce the sheer degree of skill and labour that must have gone into finishing this piece of devotional jewellery.

It is not easy to devote oneself to the worship of a Devi as wrathful as Kali. It takes years of austerities and a highly streamlined temper to turn to Her. She is a force to be reckoned with - Her temples are few and far between, and so are the priests who have the expertise to worship Her. Once the devotee has made one's submission to Her, it is nigh impossible to wean off Her or turn to any other deity from the Hindu pantheon. Ma Kali subsumes you from the soul outwards, and this bracelet would be a token of your devotion to Her in reciprocation of Her ferocity.

Rare in its ethnic look and as much in its protective power, a far improved technique used in discovering various forms and overall sophistication combined with the power to attract and charm by its exoticism to suit the contemporary taste, this silver piece with different forms of goddess Kali, the divine mother, embossed on its various parts, is a piece of fashion-jewellery, and as much the instrument to ward off evil influences. This wrist-ornament, bold and dominating, is capable of singly adorning the wrist region affording to the wearer amazing distinction. Beaten to required shapes, divine images embossed on each in relief – low and high, and wire-formations soldered, the bracelet has been smithed from standard sterling silver. It consists of seven units threaded into a single piece using rings and loops to hold them.

Essentially in the tradition of amulet jewellery seeking its mystic power in a wide range of objects but the utmost in a divine image with the beauty of an ornament combined, this bracelet, with most accomplished technique and level of finish, image-quality and sophistication arrived at, has transformed into an ornament for a ramp-walker’s arm. A bold damsel’s choice this ornament of the wrist would dominate any gathering or occasion by its exoticism and exclusiveness. Otherwise a simple silver piece, though each part being technically most accomplished and finished, with divine image incorporated as its part, or rather its spirit, this bracelet acquires also Talismanic or magical powers. The ornament is an example also of the ethnic kind of jewellery the contemporary global fashion trends are seen looking for. India’s traditional amulet jewellery, necklaces, armlets and bracelets among others, in use since at least Indus days, has most appropriately responded to such global fashion needs. However indifferent to traditional beliefs, the contemporary mind more often looks for things that strengthen its confidence and are protective.

This bracelet, the length not extendable beyond two centimeters, consists of seven units, besides the connecting hook and loop-rings. The principal unit in the centre – the largest, conceived conically with the apex designed with corbels, and sides, with columns, acquires the form of a shrine that the two armed Kali carrying a trident in the right, and a decapitated head, in the left, enshrines. A folk vision, one her right above there is an icon of the moon, and on the left, a parrot; on both sides of her feet are ‘ghatas’ – the pot-motifs. The subordinate roundels flanking the centre have images of seated yogis performing penance. The two units, beyond these flanking two, the larger ones, have been incised with two other images of the goddess, and the last ones on the two ends, have been conceived with the traditional pairs of auspicious peacocks. Quite significantly, scattered all-over, single or in pairs, are the motifs of foot, obviously the ‘Vishnu-pada’ – Lord Vishnu’s holy feet that assure movement, progress and life. 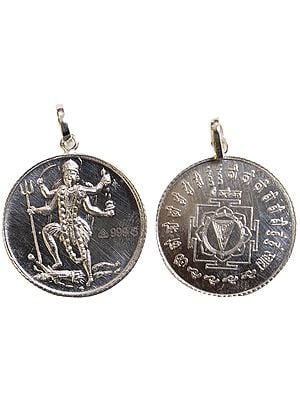 Mahavidya Kali Pendant with Her Yantra on Reverse (Two Sided Pendant)
1.3 Diameter
$90
Sold Out
Add a review
Have A Question