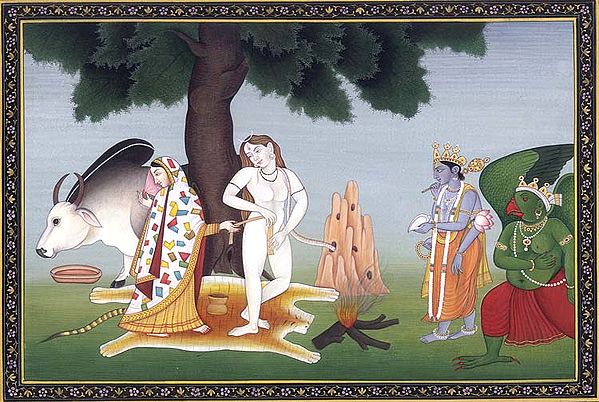 $215.00
This item can be backordered
Time required to recreate this artwork
8 to 10 weeks
Advance to be paid now
$43.00 (20%)
Balance to be paid once product is ready
$172.00
Notify me when this item is available
Save to Wishlist Send as E-card Share by Email
Shiva is invariably visualized as an ascetic in the cannons of Indian iconography. He smears his body with ash and wears only a minimal amount of clothing. Here he stands turning slightly towards his spouse Parvati who hands him a tattered loincloth. There was a specific reason that prompted this action on her part: It is well known that Garuda, the mount of Vishnu, is a sworn enemy of snakes. Shiva typically adorns himself with serpents and one fine day when Vishnu decided to pay him a visit, Shiva had characteristically coiled a serpent around his middle serving as his loincloth. As soon as Vishnu entered Shiva's abode accompanied with Garuda, the serpent fled, leaving its master bewildered and abashed. Being the perfect wife that she was, Parvati immediately came to his rescue and handed him a small piece of fabric at hand to preserve his modesty.

Shiva stands here facing Parvati, his hands busy draping himself, while she, abashed, looks the other way. He has a sweet face with three eyes and thin, sensuous and reddened lips. Coils of hair cascade down like the waves of the mighty Ganges herself. He wears his typical rudraksha bead necklaces and armlets. A crescent moon crowns his head. Parvati is dressed in rags, a befitting drape for the wife of a hermit. The serpent makes good his escape and enters a anthill nearby. The couple stands on a tiger skin sprawled beneath them. Nandi their faithful companion looms in the background.

Vishnu is attired in a saffron dhoti, and each of his four arms bears a typical implement namely the conch, lotus, discus and mace. Garuda is green, portly and elaborately bejewelled. His beak is red as is the dhoti and talons of his feet. While Vishnu has managed to restrain his feelings at the awkward happenings, Garuda's mouth is slightly open, an expression of shocked surprise on his face.