The Curse of Shiva 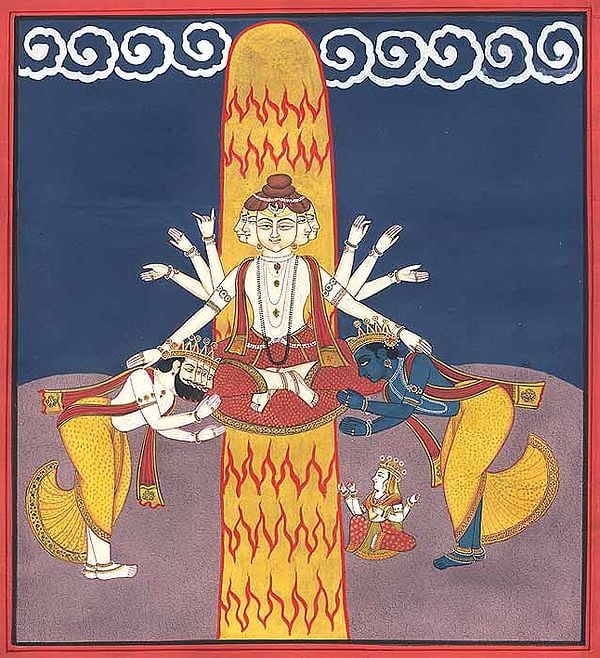 $250.00
This item can be backordered
Time required to recreate this artwork
10 to 12 weeks
Advance to be paid now
$50.00 (20%)
Balance to be paid once product is ready
$200.00
Notify me when this item is available
Save to Wishlist Send as E-card Share by Email
This painting illustrates an episode from the Shivapurana:

Once from the primordial waters issued forth a fiery lingam, composed of an awesome column of flames. This occurrence took place between the end of one cosmic cycle and the beginning of the next. Seemingly endless, this awe-inspiring sight perplexed both Vishnu and Brahma. Deciding to investigate its origins and end, Brahma took the form of a swan and rose upwards to look for its zenith, while Vishnu transformed into a boar and dove into the waters. Brahme flew higher and higher, but couldn't reach its summit, Vishnu too was not successful in reaching the bottom of this cosmic linga. Ultimately both returned to their starting pint without solving its mystery. When they both discussed their attempts, Vishnu conceded his lack of success, while Brahma untruthfully claimed that he had successfully reached the highest point. To support his claim, he presented the Ketaki flower as a witness, who falsely testified that she had witnessed Brahma' success, as she was falling down the heavens.

While they were so conversing, the linga itself burst open and the Great Lord Shiva sprung forth before them. His indeed was the omnipotent presence which even the combined mights of both Vishnu and Shiva could not fathom. But Shiva, at this moment was incensed at the falsehoods uttered by both the Ketaki flower and Brahma. He cursed Ketaki saying that her flowers would never be used in his worship, and to Brahma he directed the curse of no worship. Indeed to this day, a temple dedicated exclusively to Brahma is hard to come by, and the Ketaki flower, even though luxuriously fragrant, is never used in the worship of Shiva.

Here Shiva is seen adored by both Vishnu and Brahma, and asserting his supremacy over them. The painting's central axis is dominated by the vertical linga, made up of tiers of red and gold flames.

The five-headed, eight-armed Shiva sits majestically in a yogic posture against the backdrop of the linga. A right arm blesses Brahma, and the corresponding left, Vishnu. The gods are seen acknowledging Shiva's supremacy with a bow. Ketaki, the fragrant flower is deified as a Devi, and can be seen below the figure of Vishnu.