Gautama Buddha and Scenes from His Life (Tibetan Buddhist) 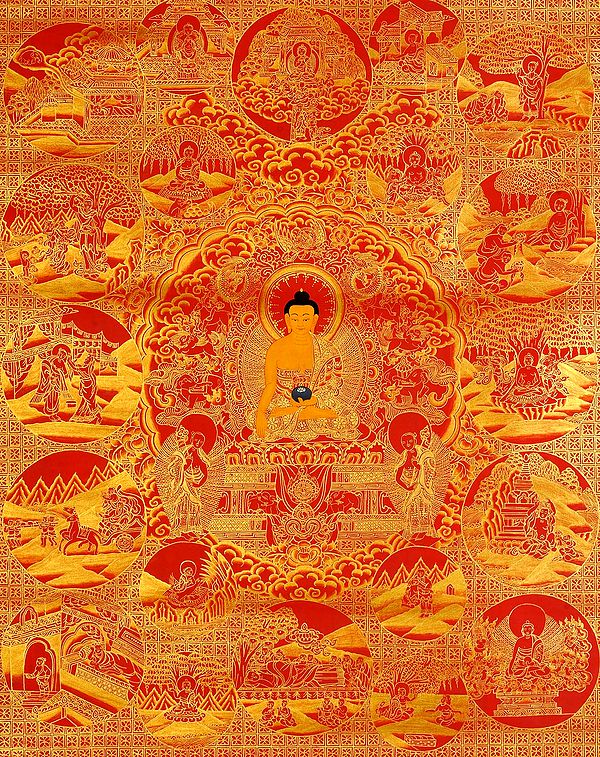 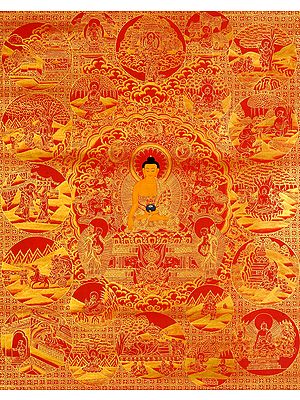 Shakyamuni has an ornate nimbus of animals, and Garuda topping them, which represent six paramitas. The ushnisha, or protuberance on his head, is the seat of divine consciousness. On the forehead is the auspicious mark, urna. The long lobes of the ears are the external symbol of a yogin. Flanking Shakyamuni are his two chief disciples Shariputra and Maudgalyayana. Below the throne of the Buddha are auspicious offering with Dharma Chakra in the centre on an attar table. The Buddha is surrounded by the scenes from his life which start from the upper left-hand side of the painting, though the scenes are not depicted in consecutive order:

Queen Mahamaya's Dream: it is said that when the time came for Shakyamuni to appear on earth he descended in the form of white elephant. Mahamaya dreamed of a white elephant that flew through the air and touched her right side with its trunk. Subsequently the Queen became pregnant.

The Scene of Nativity: When the Mahamaya's time was approaching she took a trip to parental home to have the baby there with her mother. When Mahamaya reached the park of Lumbini, her son was born in standing position, as she held the branch of the shala tree, Brahma and Indra were present at the birth. The new born baby walked seven steps towards each point of the compass and uttered, "This is my last incarnation." The child was brought to Kapilavastu and named Siddhartha. Mahamaya dies seven days after giving birth. His aunt and foster-mother Prajapati Gautami brought him up.

Raising the Prince Siddhartha: It is said that Sage Asita had visited the palace of Suddhodana (worldly father of Siddhartha) to see the new born baby. When Asita saw the characteristic physical features of the baby he felt that he was encountering a great savior or a universal ruler. He prophesied to his father that the little Siddhartha was destined to be either a universal monarch or a Buddha. Fearing this king brought him up isolated in the luxuries of the palace. But the Prince had little interest in the glamour or entertainment. King's councilors then advised him to distract the mind of Siddhartha, provide lessons in reading and writing, archery and horseback etc. Siddhartha excelled in all games and arts. But these did not help to distract the mind of Siddhartha. The next suggestion for the distraction of his mind was his marriage. Princess Yasodhara was the selected candidate and Siddhartha married Yasodhara after competing for the girl in contests of strength. After several years is born son Rahula.

Siddhartha's Encounters with four Episodes: One day Siddhartha had a strong desire to see other places of his empire and asked his charioteer to drive him outside the palace. On three trips he encountered suffering for the first time in the form of an old man, a sick man and a corpse. On his fourth trip he saw a man dressed in orange clothes and carrying a bowl, looking very calm and peaceful. The charioteer told him that this was a person who renounced the world with all its luxuries and pleasures and was looking for truth and peace, that this person had no desire or anger, and that he lived begging for his food. Siddhartha then wished to be like this 'renounced one'.

Siddhartha Secretly Leaves the Palace: An inner struggle in the mind of Siddhartha synthesizes in four encounters. He decided to withdraw into solitude and meditate, away from the precincts of a world of tears and pain, of decay and death. He secretly left his palace, mounted on his horse and finally went to the forest, where he removed his princely costumes and jewelry and cut off his long hair. He wrapped himself in a simple monk's robe and sat under a tree and meditated as a hermit for six years. He had five mendicant companions in the forest. He seeks truth by asceticism and consulted one teacher after another, but in vain. With mendicant companions he mortifies body with the severest privations. Mara had sent his wrathful armies to prevent him from his goal. The scene of Siddhartha's palace leaving is depicted in the bottom left corner while other related scenes are depicted in the upper right corner and below.

Siddhartha's Asceticism and Enlightenment: After six years of austerities, although Siddhartha was emaciated, he was not a step closer to the hoped for understanding. Convinced that this extreme method did not result in ultimate understanding he decided on another approach. He started eating and went on by himself, under reproach from his fellow ascetic, and found a quite place where he hoped to meditate in silence. He stopped in Bodhgaya and sat down to think under a large Pipal tree. During his seven weeks of pondering and meditation. Mara as mentioned above, tried to prevent Siddhartha from coming to the ultimate understanding, but in vain. At this, the solitary Siddhartha called the earth goddess to be his witness by the bhumisparsha-mudra. The earth opened and the goddess appeared and confirmed that he had remained steadfast. Mara then backed down and slunk away. After 49 days of thinking and meditating, Siddhartha received insight into both his former and present lives. He came to conclusion that extremes in life lead to nothing, that is suffering, and that suffering must be eliminated. When he reached this insight, he attained bodhi or enlightenment and he himself became a Buddha. The Buddha after attaining enlightenment walked from Bodhgaya to Sarnath where he met his five former fellow ascetics. They noticed the unusual glow that the Buddha radiated. After their initial skepticism, they listened to his words. The Buddha went to preach them the Law of Dharma in the deer park of Sarnath. He set the Wheel of teachings into motion and summarized the dharma with the words  all that exists will pass away. They were the first to join the Buddha and they formed the beginning of the monastic order.

The Buddha's Descent from Trayastrimsha heaven: It is said that the Buddha after his enlightenment has visited Thirty-three Heavens. His mother Mahamaya had before dies and was residing there in her next life as a goddess. The Buddha had promised her to teach the wisdom teaching of the Abhidharma whenever became enlightened. After the three months stay there he descended to Earth. This scene is depicted in upper centre.

The Event of Mahaparinirvana : At the age of 80, the Buddha Shakyamuni attained Mahaparinirvana in Kushinagar. The Scene is depicted in the bottom centre. According to early Buddhist tradition, the Buddha traveling great distances to disseminate his teachings, he finally reached the city of Kushinagar, where he asked his disciples to spread a couch for him in a grove. He lay there, reclining on his right side, facing west, with his head supported by his hand. He realized clearly that death was approaching. Toward midnight of the same day, the event known in Buddhist terminology as the Mahaparinirvana or 'Final Nirvana', took place. It was a full-moon night and his eightieth birthday. 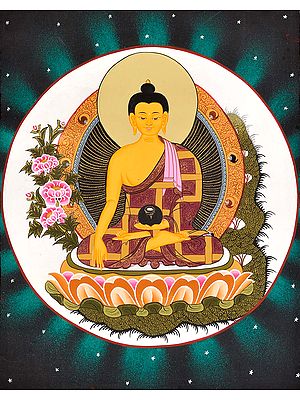 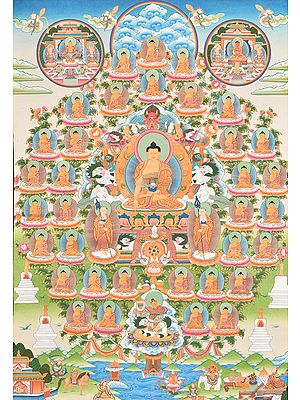 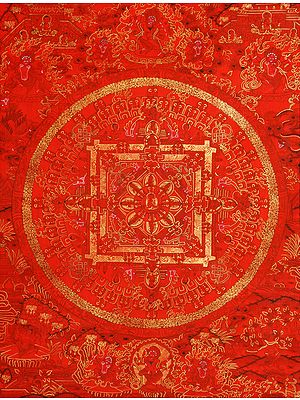 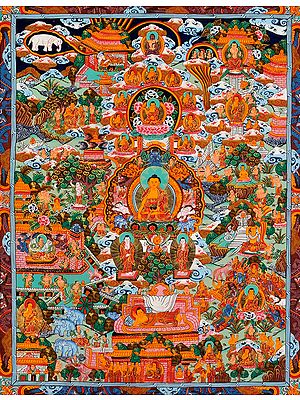 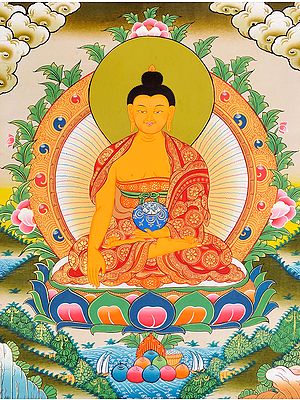 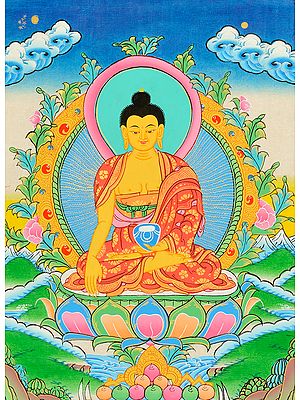 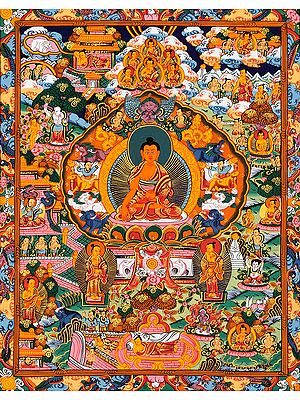 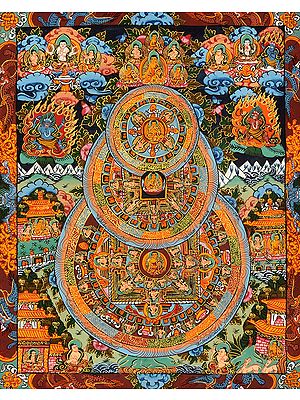 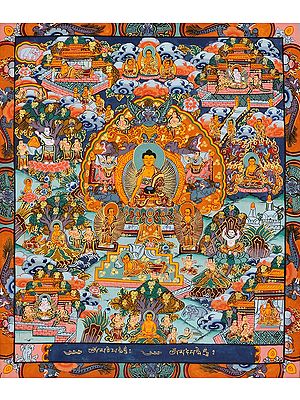 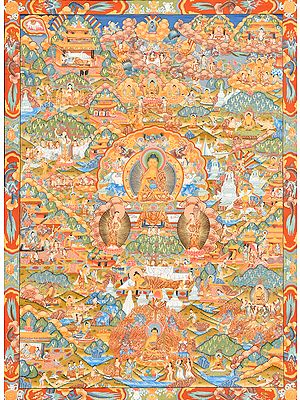 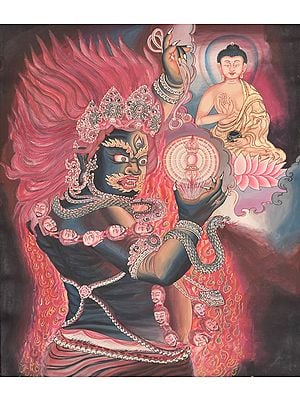 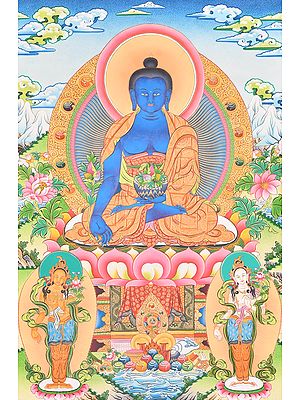 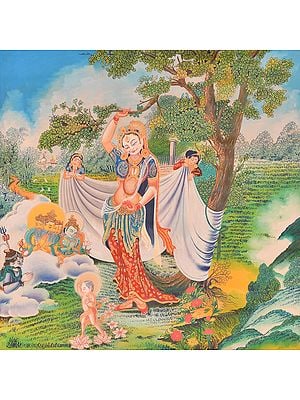 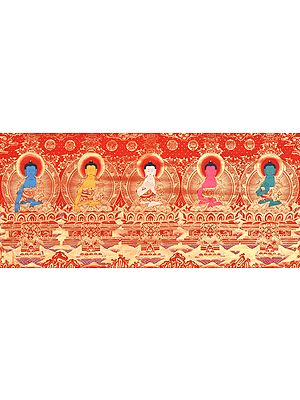