Gita Upadesha by Krishna to Arjuna 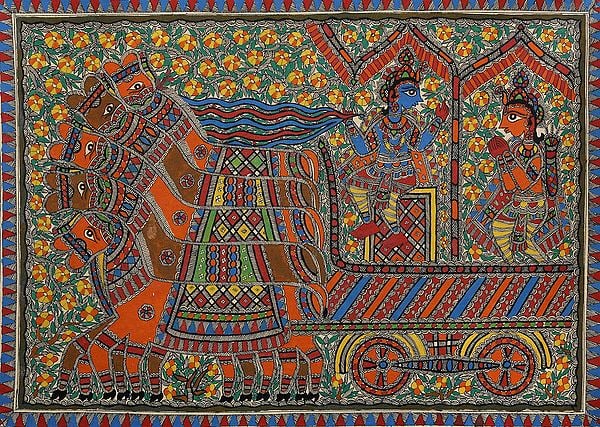 $170.00
Arjuna is one of the important characters of the epic Mahabharata, one of the two most renowned epics of Ancient India that follows the story of Kaurava and the Pandava princes. Arjuna is the son of Pandu and Kunti and by the spirit is the son of Indra. Meanwhile, Krisha is a main deity Hinduism, an avatar of Lord Vishnu. Krishna is also holding a major role in the Mahabharata. Within the Mahabharata is the Bhagavad Gita which details a legendary chariot driven by Krishna and Arjuna. The chariot symbolizes the body (represented by Arjuna as the passenger) while the chariot is commanded by Lord Krishna that represents the Atma or the Self (deeper intellect). Together, Lord Krishna and Arjuna are depicted setting off for the war (Kurukshetra). This very chariot ride can be interpreted as a metaphor for a human's inner sense and the body, a battle of the mind. The five horses in the painting are aptly called indriyas or the five senses (sight, smell, touch, hearing, taste). Lord Krishna (intellect) and Arjuna (body) leading these senses towards the battle is symbolic of how the Mind, Self, and Senses work together to lead a person to the right situation.

In this painting, Lord Krisha is depicted with blue skin, true to the tradition where the holiness of the gods is signaled by blue skin. Arjuna is depicted with orange skin. His hands are in an Anjali mudra (giving praise) while Krishna’s hands are on the reins. Both are opulently dressed. They are painted with the Madhubahi traditions of lively natural colors such as red, orange, blue, and green. A key feature of this painting style is its handcrafted geometric patters that fill every inch of the painting as seen on the bodies of the horse, the flower-filled backdrop, and even the borders.