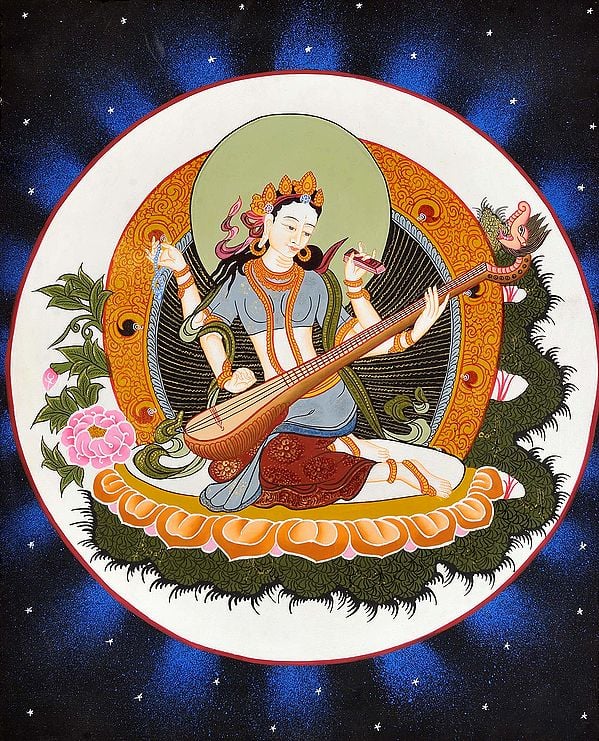 $135
Saraswati, the Hindu goddess of knowledge, music, art, and learning, is one of the most prominent deities in Hindu mythology. Along with the goddesses Lakshmi and Parvati, she completes the holy Tridevi, the female counterpart of Hinduism’s holiest Trimurti that includes Brahma, Vishnu, and Shiva. Saraswati is also called Veenavadini (or the goddess who plays Veena, a chordophone musical instrument) which is beautifully represented in this painting of her. The goddess has usually depicted seating on a white lotus, as in this painting. By tradition, her element and symbols are usually in white—as seen in this painting where the lotus, her skin, and the white space at the back. The white theme is a symbol of purity, search for true knowledge, and wisdom.

In this painting, she is shown with four hands which represent the mind, intellect, imagination, and the ego. The four hands are also seen as either busy in action or hold a symbolic item. On one hand, she is holding a Pustaka or a book that can be considered a representation of the Vedas, the universal and divine knowledge and source of all learning. A quick zoom shoes Saraswati holding rosary beads or the mala. This is a symbol of meditation and spirituality. Meanwhile, the veena is Saraswati's most recognizable symbols. It is shown front and center in this painting and represents the creative arts. The act of Saraswati playing the veena is also symbolic of the knowledge that leads to creative harmony. The painting comes with a bright palette that adds a touch of liveliness to the whole picture, taking cues from Saraswati's association with Anurag, or love for rhythm and music. 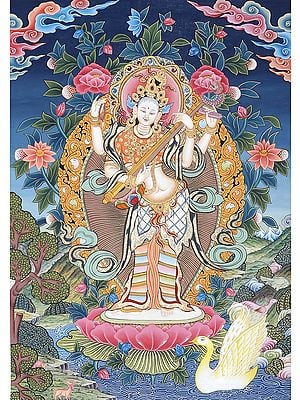 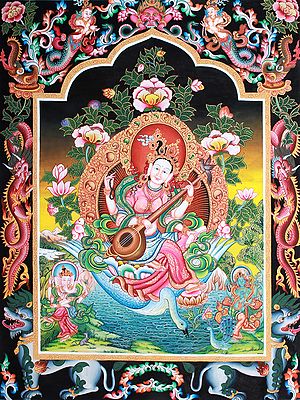 The Radiant Devi Sarasvati In Her Elements - Brocadeless Thangka
Size - 16.5 inch X 22 inch
$295
Out of Stock
Add a review
Have A Question