Hanuman Fetches A Mound Of Sanjeevani 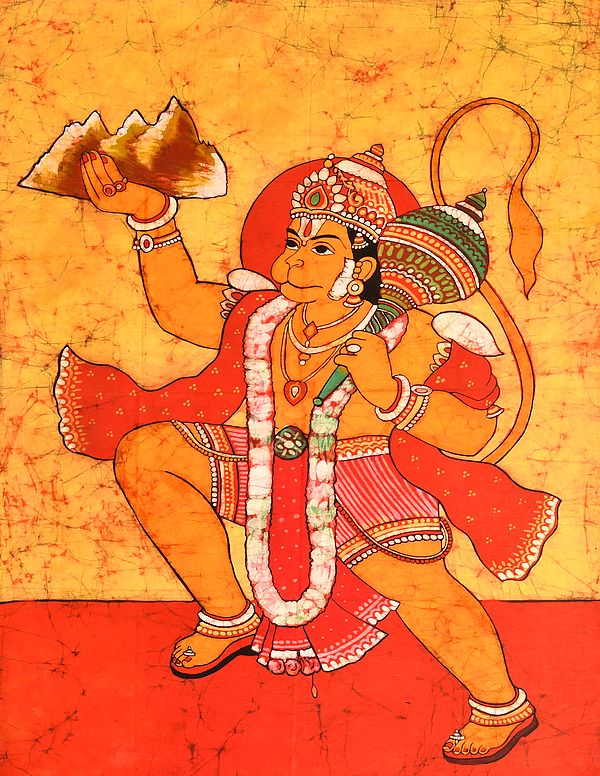 $55.00
The Lord Hanuman bearing a mound of the wild sanjeevani as He traverses over the subcontinent is the most endearing of His iconographies. When the brothers encountered a crisis and Lakshmana, the brother of Purushottama Rama, was on the verge of succumbing to His injuries, no one but Hanuman could be counted upon to revive Him. Having accomplished all eight yogasiddhis, He had flown over to the Himalayas in no time, rooted out an entire range that was home to the all-important herb, and brought it back to the party down South. It is said that he had made a brief stop in the lower mountains and touched His knee at a mountaintop, where a temple has been built to immortalise His great yogic feat.

It is indisputable that Lord Hanuman is the brightest shining jewel in the necklace of Ramayana characters. He has been painted against the stretched cotton fabric canvas characteristic of Indian folk paintings. The technique employed is called batik, the procedure for which involves repeated waxing and dyeing to aid the composition. From the pronounced jawline to the superlative musculature of His form, from the indispensable goad to the large tail flourishing behind Him, this is a painting of the Lord in His full glory. He is minimally clothed as befits a yogi, with His haloed crown and shringar in place. The statement red-and-yellow colour palette exudes a sense of power and stability that complements the aura of the deity in question. 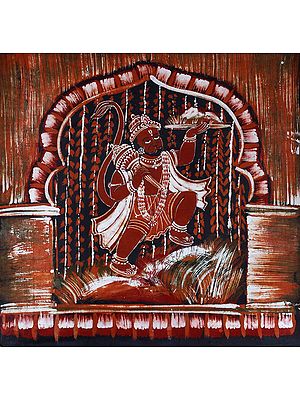