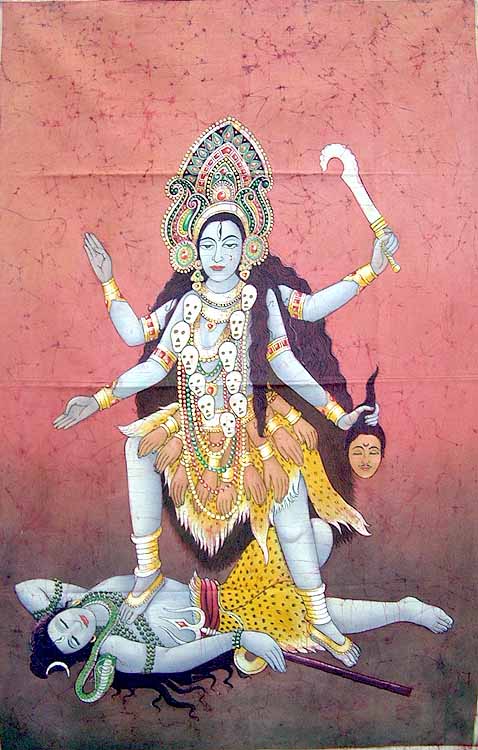 $95
Quantity
Notify me when this item is available

Fair trade
Corruption in the cosmos enraged Parvati and she became so angry that her skin turned black and her eyes became red. The gods, terrified of Parvati's savage form, called her Kali, the dark goddess. They tried to placate her. But Kali, displeased with the state of the world, ran amuck destroying everyone and everything that crossed her path. The very existence of the cosmos was threatened. To restrain her, Shiva turned into a corpse and blocked her path. The goddess, blinded by rage, did not take notice and stepped on him.

Depicted here in the terrible countenance, the four-armed goddess holds a dagger and a skull by the hair in two left hands and makes the gestures of fearlessness and boon bestowing with the right hands. She wears a fancy crown with various gems encrusted, ornaments in her arms and feet, but the rich necklaces and strings of beads get overshadowed by the garland of skulls that Kali wears. The dark tresses cascade down her back like a dark river. She stands over the corpse of Shiva who looks serene in death, with one arm under his head and the other holding his trident close to him. He is dressed in a tiger skin loin cloth. The third eye rests obliquely on the forehead, the crescent moon on his knotted locks and a cobra drapes around his neck. Between Shiva and Parvati, when one was angry, the other spouse placated him or her, and the world was saved from total destruction.

Hymns To The Goddess And Hymn To Kali (Book)