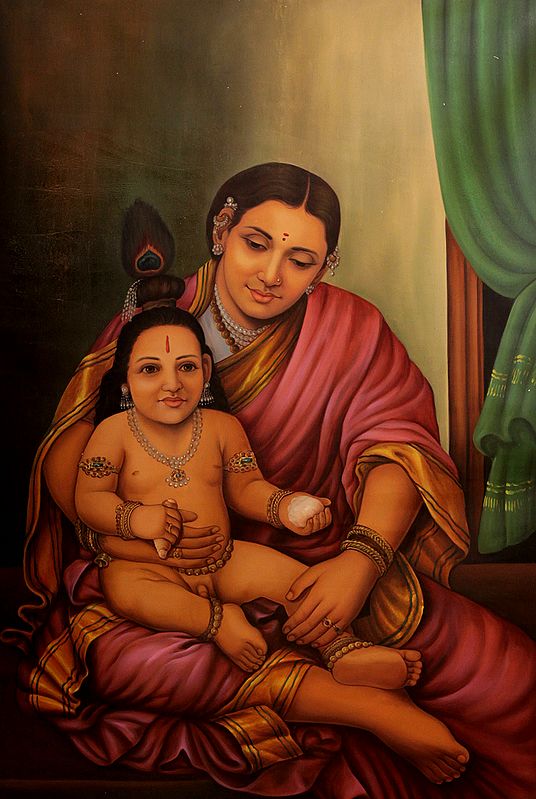 Fair trade
Lila stories referred to in the Bhagwat have been popular themes with painters all over India in all times.

Krishna, Yashodha's darling son was a delight to the cowherds of Vrindavan. Krishna had transcendental qualities from birth and he grew up in the power, beauty and opulence of the level of Narayana, the supreme personality of godhead.

The mother's lap is the throne of baby Krishna as he sits bejeweled, holding in his hands the butter and yoghurt, he was so fond of. As Yashodha became engross in her household duties, Krishna with brother Balarama stole butter from the gopis houses. The cowherdesses came complaining to Yashoda, she scolds Krishna in front of them but as soon as they have left, she takes Krishna in her lap and is overwhelmed with maternal affection. She herself is dressed in rich clothes and jewellery, befitting the wife of Nanda Maharaja. There is love in her gesture as she closely holds her son. Her downcast eyes show her contentment with life as she sees her son grow. She knows he is no ordinary child and feels blessed to have him.

The baby is wearing jewellery that his mother has so lovingly adorned him with. She has put in his tiny feet and at the waist, strings of tinkle bells so that she may know the whereabouts of her child as she executes her domestic chores. Krishna's hair is tied up in a neat knot on top of his head with a peacock feather inserted as a head decoration.

The viewer is struck by the bond and love between the mother and her child in this awesome painting. The colours used are brilliant, yet subdued, so as not to disturb the gentle quality of the theme and the emotions thus portrayed.

Mother Yashoda with Krishna and Balarama (Miniature Painting on Paper)

Little Krishna gets a Bath (Miniature Painting on Paper)