Life of Krishna with the Ten Avatars of Vishnu 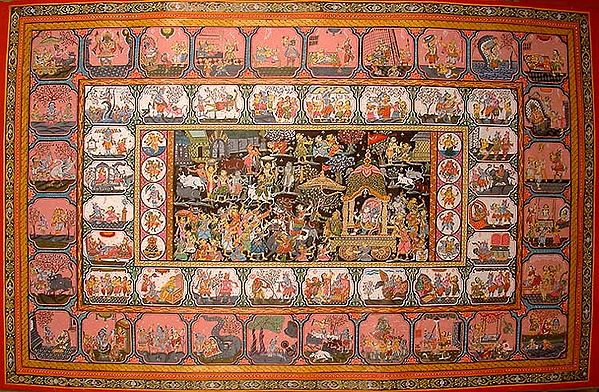 $390.00
This item can be backordered
Time required to recreate this artwork
6 to 8 weeks
Advance to be paid now
$78.00 (20%)
Balance to be paid once product is ready
$312.00
Notify me when this item is available
Save to Wishlist Send as E-card Share by Email
Krishna plays an important role in the religious, social and cultural life of India and his life stories have attracted artists of all ages. Vishnu Purana and the Bhagwata Purana are the two chronicles which provide them with numerous legends about Krishna's life.

This painting is perhaps the best example of a pictorial narrative which includes most important episodes from Krishna's life. Starting from top left, the artist begins to tell his tale  the early few sections narrate the story of Krishna's birth, moving downwards to show the love showered on baby Krishna. The artist takes delight in depicting his childhood pranks and his encounter with various demons. He does not forget to show Krishna's loyal friendship with childhood friend Sudama. The narration moves in clockwise direction, with a story attached to each depiction.

The central part is slightly crowded and the confusion enhanced by the black background. But before the description of the middle section, the one closest to the centre shows the ten incarnations of Vishnu, Krishna being one of them. As mentioned, the central part shows commotion, what with the villagers going about their routing chores, the cattle fighting for space. But the most conspicuous part is the chariot carrying Krishna and Balarama, driven by half a dozen horses. The chariot is surrounded by the cowherdesses who have not had enough of their beloved Krishna.

The entire pictorial epic is bound within three small borders.