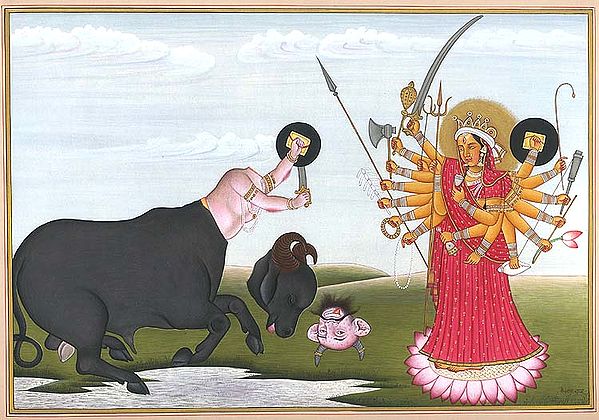 Fair trade
This painting depicts the killing of Mahishasura, the buffalo-headed demon, at the hands of Mahalakshmi, who is seen standing on a full-bloomed lotus. Ironically, this beautiful form of the Goddess came into being due to the combined wrath of the devas. The series of events leading to the birth of Mahalakshmi and the destruction of Mahishasura make up one of the most celebrated myths of the Devi Mahatmyam. According to legend, Mahishasura, the demon, had usurped the kingdom of Indra, the King of the devas (gods), driving him and all the other gods out of the celestial spheres. Humiliated, the devas approached the supreme triad of Brahma, Vishnu and Shiva. As the devas recounted the tale of their woes at the hands of Mahishasura, the rising indignation of all assembled issued forth as streams of fire whereby each god projected forth his energy and powers. These streams of flame converged and out of this conflagration arose the resplendent form of the eighteen-armed Mahalakshmi in whom were integrated all the divine powers. Hence she is called Mahalakshmi, i.e. maha (supreme), lakshya (goal) of life. In each arm she bears a weapon representative of power conferred by the gods.

Starting from the top right of the painting under consideration, we see that she bears a dhala (shield), symbolic of dharma (righteousness) which gives one forbearance to withstand the onslaughts of kama (desire), krodha (anger), lobha (greed), moha (attachment) and ahankara (pride); danda (staff) given by Yama, the God of Death, is the mrityur-danda, reminding one of an inescapable fact of life and the need to discipline one's life accordingly; a bow which, as has already been mentioned, represents the mind. However, here we may consider in a little more detail the significance of the bow. The act of straining the string of the bow to the ear indicates the effort to reach a goal.

The Mundaka Upanishad compares the sacred syllable 'OM' to a bow and the purified and concentrated mind to an arrow and exhorts us to shoot the arrow with intense alertness, so that it may hit the target, which is Brahman (the Supreme Reality).

The Goddess Mahalakshmi is also seen holding a padma (lotus), which in her hands symbolises material prosperity and a shankha (conch-shell) representing good fortune. The pasha (noose) she wields given by Varuna, the Lord of the Oceans, whom the devas described as possessing extra ordinary powers and wisdom, symbolises strategy, particularly the maneuver of luring a powerful enemy into a trap and then attacking him. This is specially applicable to the enemy within. The mind, as we are all aware, is a wily and elusive creature difficult to control. The noose in the hands of the Goddess Mahalakshmi symbolises the attempt to hold and control the mind. According to Zimmer,' the noose - the lasso that catches wild animals and fetters the enemy in a sudden assault on the battle field denotes knowledge, the master-force of the intellect, which seizes and fixes with a firm hold on its objects. Towards this end the Goddess holds a ghanta (bell) in the hand next to the one bearing the noose. The Hatha Yoga Pradipika states ' the antahkarana (mind) like a deer becomes absorbed and motionless on hearing the sound of bells, etc.; and then it is very easy for an expert archer to kill it. Broadly speaking, the bell symbolises sound, the carrier of the language of divinity, which leads of divinity, which leads the mind to the state of samadhi, i.e., complete absorption in the ultimate. The sura patra (wine-cup), which Mahalakshmi holds in the foremost hand on her left side, signifies the invigorating elixir of the divine life force, the strength that comes from spiritual inebriation. It is said that Mahishasura took on different forms during the battle with the Goddess lifted the cup of divine elixir to her throwing out the following challenge:

In her right hands, the goddess wields a sword, a mace, an arrow and an axe which was given by the celestial architect Vishvakarman, symbolizing constructive activity and the inverse creativity involved in all acts of destruction; a spear offered by Agni, the God of Fire, symbolizing energy in its destructive and constructive aspects. In the hands of the mother, it draws our attention to her power of destruction for the purpose of reconstruction and purification. Mahalakshmi also carries a discus, a rosary and a trident, which will be, discussed in connection with her other manifestations. In the fourth hand on her right side, Mahalakshmi wields Indra's vajra (thunderbolt). The thunderbolt once release inexorably reaches its target. In Devi's hand, it symbolises not only the inexorable retribution one has to undergo for one's wicked deeds, but also the divine wrath, which subdues the wicked. According to Hindu mythology, the thunderbolt is made out of the bones of the sage Dadhichi. Legend has it that the devas were being harassed by the demon Vritasura. Unable to vanquish him despite repeated attempts, the devas led by Indra approached Lord Vishnu. The all-highest advised them to appeal to sage Dadhichi for his bones. Strengthened by constant and sever penance, these alone would make an effective thunderbolt to vanquish Vritasura. Hearing the devas' request, Dadhichi immediately offered himself for their welfare. Going into samadhi, he merged his self with the universal soul, casting off his body like the slough of a snake; whereupon the devas gathered his bones and made a thunderbolt which finally vanquished Vritasura. Thus, the thunderbolt also reminds us of the king of immense strength we can accumulate by daily discipline and austere living to fight against the onslaught of evil.

The Goddess is coral-complexioned, symbolizing rajas (activity), the pulsation of life. She is fully armed for battle, yet there is no trace of wrath on her face. Indeed, her serene countenance, the expression of withdrawal in her eyes would suggest that the whole course of events including her own role as a rescuer is but part of the cosmic dream.

In direct contrast to this radiant image further illumined by the brilliance of the diadem and other ornaments adorning her person, is the beheaded form of Mahishasura. The head severed from the body, with tongue protruding, lying at the feet of the victorious goddess, personifies repentance born out of the realization of the hollowness of pride. And, in so far as humility facilitates closeness to God, the sages ordained that along with the worship of Devi, Mahishasura should also be worshipped for he attained sayuja (oneness) with the Goddess. Yet, the aggressive stance of his body even at the moment of death reflects his bravery. Indeed, in so far as a perfectly natural sense of pride and self-confidence often converts itself into insolent self-consequence, which rejects the idea of anything superior to it, there is a Mahishasura dormant in all of us. Hence the devotee prays to the mother:

In this painting we see the killing of Mahishasura at the hands of Mahalakshmi, who is standing on a full-bloomed lotus. Her face, though revealing the emotion of tranquility, radiates a dazzling light. It appears that, after killing Mahishasura, she is fully immersed in her stance of tranquility. In the features of the subduer, there is no trace of wrathful emotion, though she has weapons and missiles; she is steeped in the serenity of eternal calm. Her dreamy eyes personify that for her the whole course of the universe, including her own role as its rescuer, is but a part of the cosmic dream. Her countenance full of vigour, graceful, dreamy and faraway is unsurpassed and incomparable. The synthesis of red and black colors has balanced the theme of the painting. In the background is seen the open sky radiating the brightness of white clouds. The aggressive stance of Mahishasura reveals his bravery. The beauty of Mahalakshmi's face is illuminated by the brilliance of her diadem and her ornaments, while her tender limbs radiate the enchantingly sweet luster of womanhood. The characteristic of the painting is the dexterity with which a variety based on reality has been created.