Narasimha  The Fourth Avatar of Vishnu 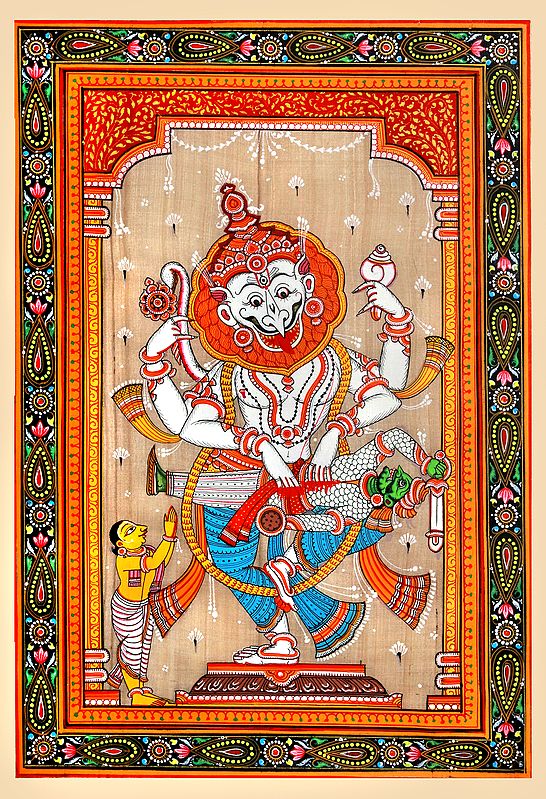 $85.00
This item can be backordered
Time required to recreate this artwork
6 to 8 weeks
Advance to be paid now
$17.00 (20%)
Balance to be paid once product is ready
$68.00
Notify me when this item is available
Save to Wishlist Send as E-card Share by Email
The fourth avatar of Vishnu is depicted as half-man, half-lion. The Lord took this form to overcome a demon who was insuperable by day or night, man or beast. His foe was a proud royal devotee, called Hiranyakasipu, who received a boon as a result of ritual penances to Shiva. Hiranyakasipu could neither be defeated on the ground nor in the air; in his palace nor outside it.

Here we see Narasimha with the human body and head of a lion. A golden mane is painted around the head where an ornate diadem also sits. He holds the king in his lap, which is neither on the ground, nor in the air. He also appeared at sunset, thus evading Siva's boon to the king. He also did not use any weapon of offence or defence. We can see Vishnu as Narasimha, tearing open his body with bare claws. The image of this four armed deity stands on a pedestal, and since he stands, Narasimha bends his left leg to hold the king's body. The strictly horizontal body of Hiranyakasipu is in contrast to the vertical image of Narasimha.

On the left corner of the painting, a devotee stands in reverence with hands folded and raised.