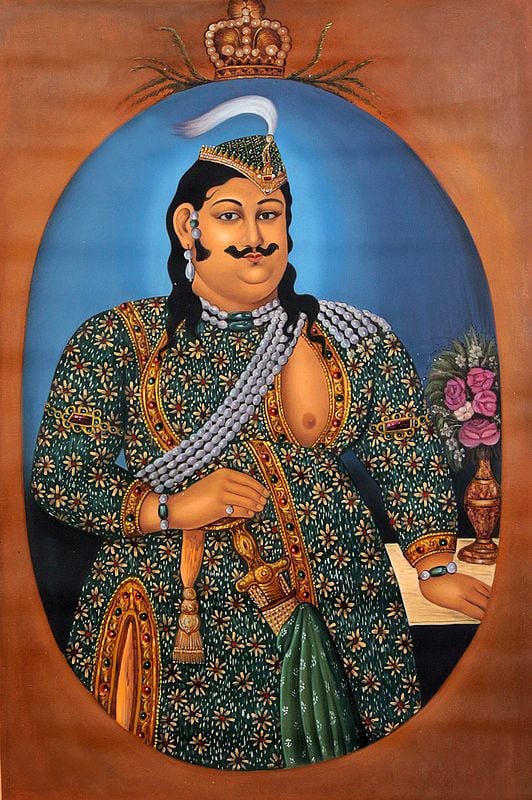 $243.75$325.00  [ 25% off ]
Notify me when this item is available
Save to Wishlist Send as E-card Share by Email
Deccan painting reflects an interest that is exclusively in persons and events and is essentially an art of portraiture and chronicle.It is academic, dramatic, objective and eclectic. The profuse decorative touches that lent charm to Deccan paintings make it more poetic than Mughal art in many respects.

Ornate in style, this painting represents the Nawab possessing grandeur, and a subtle hint of authority. The figure has titanic proportions and the bold rounded body has a similar face to go with it. Though the pose is frontal, the gaze remains inside. The figure is locked in its own brooding silence. He stands with one hand on the hilt of the sword and the other resting on the small table holding a flower filled vase. Superfluous fat finds its way to the face also, giving him a double chin. The mouth and the cat-like eyes are very small in proportion. The hair and moustache is uncommonly shaped. His deep green clothes are painted with yellow and red flowers giving it a gem-like appearance. The border strip at various places has stone studded embroidery. Giving his body exposure is a designed cut bordered with the embroidery strip. He wears strings of pearls not only in his neck but also across his shoulders. The cap that he wears is small but matches the clothes.

The superb technique and paint application brings much to the haunting quality of the portrait. The traditional manual dexterity is there but there is an inclination to an overelaboration of color and an increase in the amount of detail is observable.