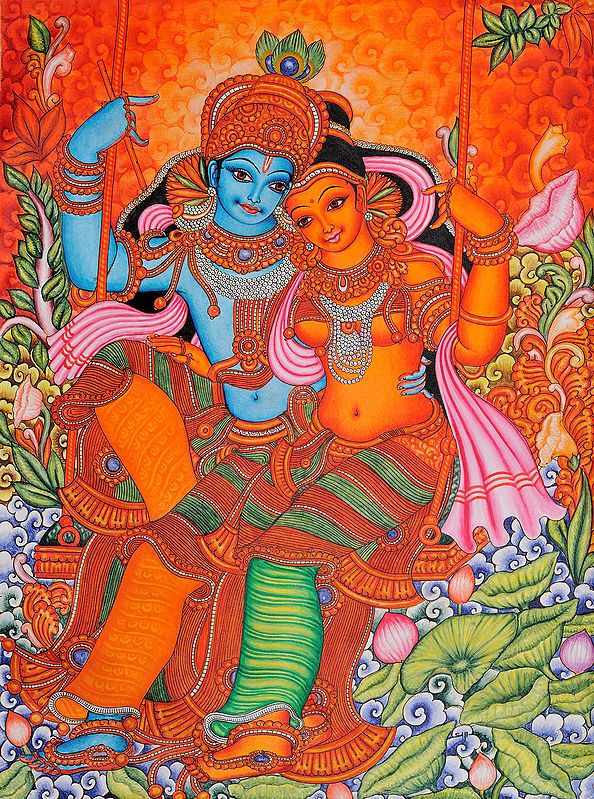 $595
Quantity
Notify me when this item is available

Fair trade
This painting, oil on canvas, a refined version of art style the people of Kerala used for centuries for decorating the façades of their huts and their fishing boats, represents Krishna and Radha enjoying swinging. A contrast to the dark sky often covered with deep impenetrable clouds and to the ocean’s awful expanse of the blue the fire-like glowing orange was this folk art’s basic texture, and also the people’s need. The body colour, the colour of costumes or that of the background orange was its essential component. They inhaled its warmth and it revitalized their energies. The cloud-covered sky or the ocean’s waves gave them the idea of colour shading but the colours that they were acquainted with were the basic ones : blue, green, yellow, black, white … Besides the curling clouds the ocean’s waves, torrential or gentle, ferns growing around the shores, or those bursting out of waters, gave them their forms for conceiving their sky or space beyond the earth, their plants, trees and the entire nature. Hence, when seeking to adorn things around them these were their forms, and these, their colours.

This people’s idiom which this canvas seeks to reproduce reached the apex – its refined version, in the murals at Mattancherry palace, Kochi, sometime in early sixteenth century. An earth covered with vegetation, a sky covered with clouds, and an ocean covered with waves, conditioned the Kerala artist’s vision of his canvas. Whether the Mattancherry palace murals or this contemporary piece, the artist preferred covering every inch of space with one form or the other. As the tradition was inherited from the grass-root vision the stylistic unity never changed, and when in mid-nineteenth century some new murals were added to Mattancherry palace walls they revealed the same idiom as the earlier ones of the sixteenth century. This painting, irrespective of a different medium, both the type of colours and the canvas, and far different hands that rendered it, not essentially brought up as the Kerala folk, is an excellent example of the same traditional art attributing to the divine figures the ethnic twist.

The painting represents Radha and Krishna seated on a swing hung over the branch of some tree which is not seen. The ropes and the partially visible plank the swing consists of are in fiery orange while the cushion laid over it is in deep green. The artist has used similar orange for modelling the figure of Radha though the figure of Krishna is in blue, his usual body colour in entire South Indian art; in north his body colour is black. Besides his body colour Krishna’s identity is revealed also by the peacock feathers cresting his crown, the flute he is carrying in his right hand, yellow garment – his ‘antariya’ and the Vaishnava ‘tilaka’ on his forehead.  Radha’s identity is not revealed independently but in Krishna’s. Her figure, more so her semi-exposed breasts, has been modelled on the lines of female figures in Kerala folk paintings. With her left hand she is holding the rope of the swing, while with her right, Krishna’s waist. Contrarily, with his right hand Krishna is holding the swing’s rope, and with the left, supporting Radha.

Slightly angular towards the chin the faces of both, Radha and Krishna, are smaller in proportion to the rest of their figures – even the breadth of their necks being almost similar to the breadth of their faces. They have large amorous eyes, Radha’s revealing blissfulness, and Krishna’s, absolute delight. The eye-brows are bow-like carved and are evenly thick all over. Typical of Kerala folk style, the figures of both Radha and Krishna have been conceived with sleek narrow low-height noses though elegantly aligning with broad foreheads. Krishna is putting on a Kerala style crown, and Radha has her hair dressed like a towering crown. They both are wearing traditional jewellery consisting of the ocean-born beads and shells. 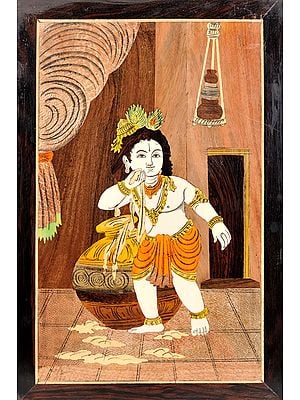 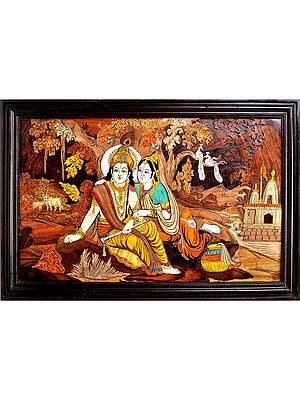 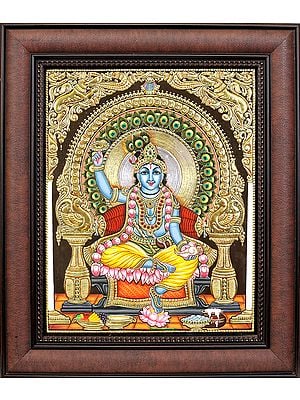 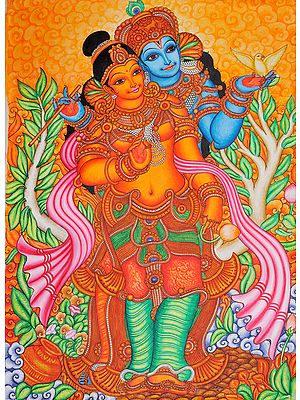 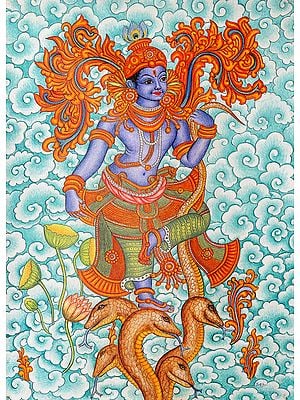 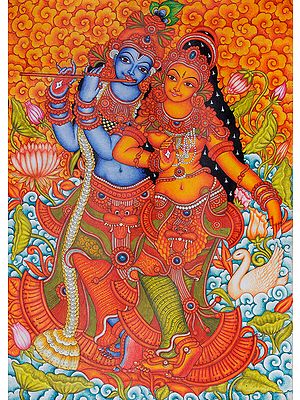 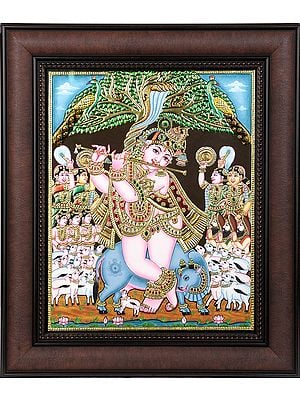 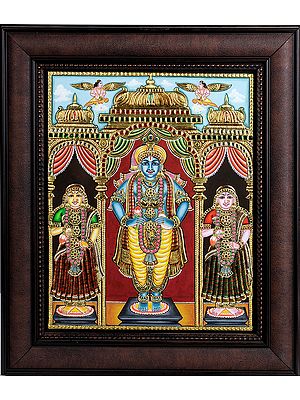 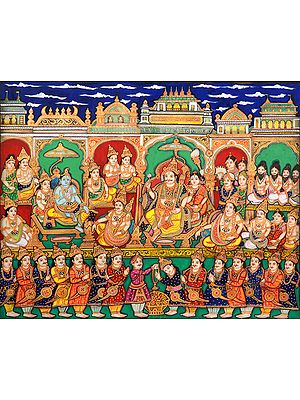