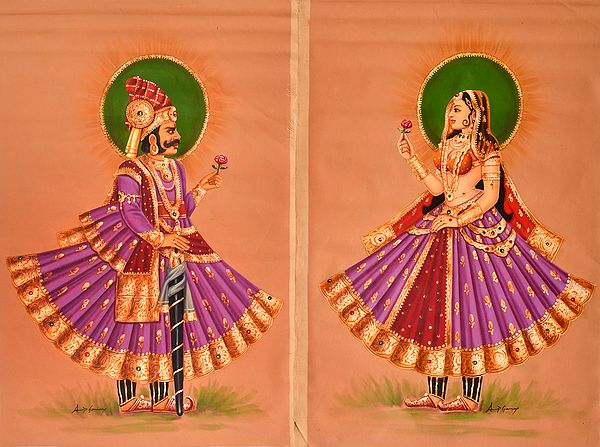 This painting beautifully divides itself into two halves depicting the royal pair standing on either sides of the curtain with a rose in their hands. The king and the queen are too busy in their everyday chores, so they don’t get enough time to express their love for each other, so here they finally come out of their royal room when the sun is about to set, with a rose in their hand and garbed in their luxurious attires, separated by just a minute wall of shyness, they are keen to present their gifts of love to each other.

The queen wears a purple flared skirt having royal red pleats in between with the similar type worn by the king as a single garment along with a royal red stole. Their attires are decorated in mesmerizing gold foil work, forming thick borders and zari bootis spread all over. Queen’s chunri and blouse form a great contrast to the background, and the king’s unique crown is sequenced with golden checks.

Curve of her waist highlights her kamarband in a sensuous manner to the king, with the other rich ornaments framing their personality. King holds his royal black stick as a gesture of his authority and superiority with the green aureole formed at the back of their heads glorifying their character and kind nature. 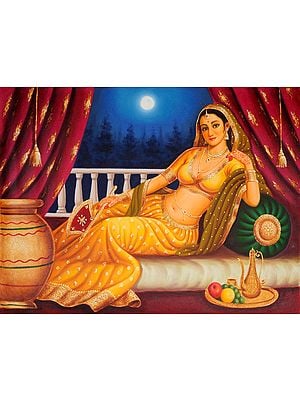 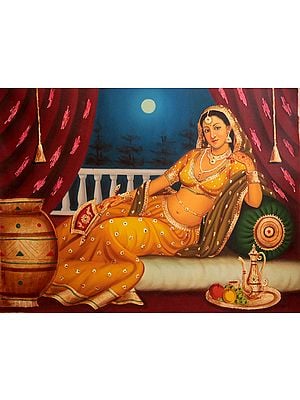 Backorder
A Royal Damsel Enjoying Solitude with a Puff of Hookah
41.0 inches X 31.0 inches
$685
FREE Delivery
Add a review
Have A Question