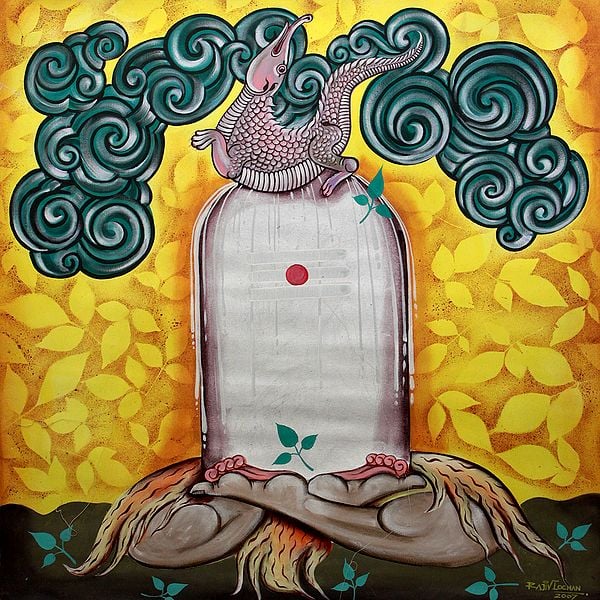 Shiva as Ling in Yogasana

Fair trade
This contemporary painting, oil on canvas, represents Lord Shiva as Ling engaged on one hand in Yoga – meditative asceticism, and on the other, in his ‘Brahmandiya lila’ – the cosmic act of creation. The painting has used the semi-abstract style for representing its theme by using conventional forms which are both realistic as well as symbolic but attributing to them unusual dimensional breadths – the usual trend of contemporary Indian painters who often discover in myths, traditions or conventions their basic image but in their imaginative stretches, its real meaning and thrust.

Instead of being completely abstract as was the art of the preceding generations of the modern artists in India and Europe, or a miniature-like narrative or descriptive, this painting relies on forms but to create out of them a wider image than what these forms seem to actually portray, and thus, to extract from them a wider meaning. This painting’s focal point is the ‘ling’ icon, which is obviously the Shiva-ling. ‘Ling’ is Shiva’s aniconic form in worship now for some five thousand years, the earliest examples reported from Indus excavations dated around 3000 B.C. The Shiva-ling icon consists of two parts : ‘ling’ and ‘yoni’, ‘ling’, the aniconic manifestation of Shiva, installed in/on ‘yoni’, the symbolic representation of Parvati. In later Lingayat cult ‘ling’ was added with some degree of anthropomorphism. It now began having faces too, sometimes just one, but also more up to five corresponding to Shiva’s iconic form with faces, one to five. Simultaneous to this there emerged in Shaivite worship tradition the cult of adorning the Shiva-ling with a ‘Tri-punda’ mark. This obviously saw a face in an aniconic Shiva-ling which was otherwise without a face.

Besides attributing to the Shiva-ling its role as ‘ling’, which is creation, the artist has so manipulated its form that it reveals a rare kind of Shiva’s anthropomorphism – an image as also one of its main manifestations. From the earliest times, that is obviously Indus days, besides his aniconic ‘ling’ form, in his iconic form Shiva manifests as Yogi engaged in penance. Time and again Puranas, too, allude to him as often retiring to forest and engaging into penance. Using rare imagination this painting : a vision of Shiva, realises him not only as ‘ling’ but also as Yogi engaged in meditation. The Shiva-ling part of the image has been installed over a pair of legs with upwards turned feet as in the ‘yogasana’ : a usual seating posture that ascetics take to when engaged in meditation or penance. The ‘ling’-form, rising over these legs, looks like the body’s upper part. More than a mere ritual mark the ‘Tripunda’ affords the ‘ling’ a strange sense of having a face, and correspondingly a form, though manifestly it does not have any. The analogy goes farther with the tiger-skin which the two legs have under them. Shiva is known to have always used tiger-skin to sit on when undergoing penance or meditation, or even otherwise.

However, such transformation of the Shiva-ling into his anthropomorphic vision does not affect the ling’s creative role which is its primary cosmic function and is incessant. The white substance discharging from the ling’s top in the painting is suggestive of the act of coition – the endless creative process which reflects in Shiva’s union with Parvati manifesting in Shiva-ling form, ‘ling’ symbolising Shiva, and ‘yoni, Parvati. Metaphysically, Shiva is the ‘Purusha’ – the enlivening force, and Parvati, ‘Prakriti’, the matter, capable of taking to any form. In this painting, the artist has sought to plant body’s lower half at the ling’s root – a scheme under which elimination of ‘yoni’, Shiva-ling’s other component and its feminine aspect, becomes indispensable. Lest it impaired the ling’s basic cosmic role : the incessant act of creation, the artist has so managed his canvas that the male principle : ‘ling’, unites direct with Prakriti – the Parvati’s manifest form and as symbolic of her as ‘Yoni’. The artist has planted over the top of the ‘ling’ a mythical animal that symbolises the character of creative passion which even in Shiva is as intense and uncontrollable as in an animal. 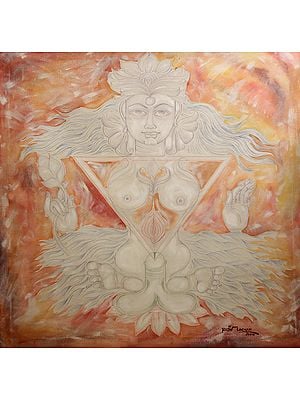 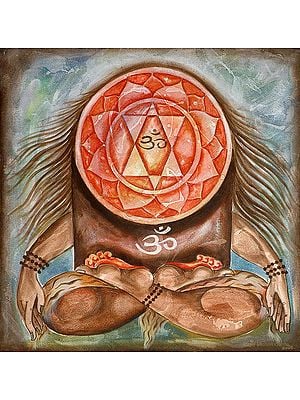 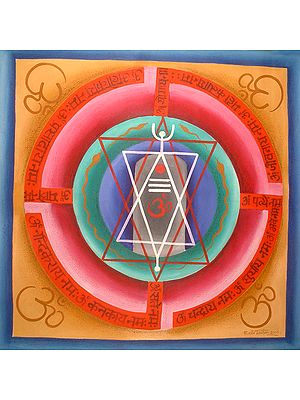 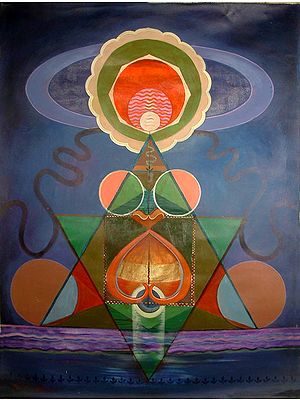