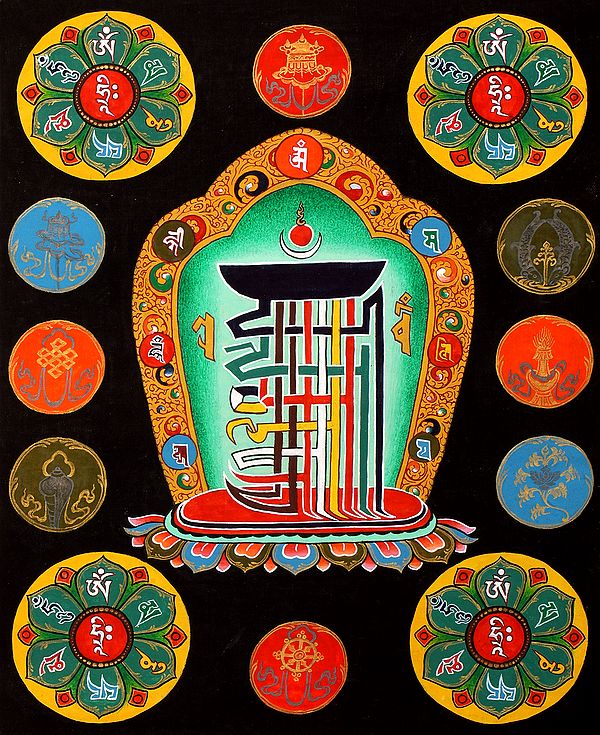 $80.00
Notify me when this item is available
Save to Wishlist Send as E-card Share by Email
This thangka depicts holy mantras of esoteric Buddhism, while the center of the canvas is filled with the mystic monogram of the ten-stacked syllables of the Kalachakra mantra. This is the best-known symbol of the Kalachakra system, and probably of the entire Tibetan tantric tradition. The symbol consists of an ornamental ring of fire, then the main symbol which combines seven individual syllables, on top are a crescent, a disc and a dissolving flame-tip, making ten.

It is well known that Tibetan received Buddhism from India and astrology from China. It is said that Chinese wife king Songtsen Gampo, princess Wen Cheng brought astrology and medical treatises with her. The astrological texts were recomposed in Tibetan language by one of the ministers of the king. Guru Padmasambhava designed several new protection circles and talisman seals which were incorporated into the astrological diagram. The Kalachakra was introduced into Tibet in early 11th century A.D. and later on the system of astrological cycle of sixty was officially established. The Kalachakra system is bases on the synthesis of Indian and Chinese astrology.

The ten interlocking syllables of the Kalachakra mantra (om Ham Ksha Ma La Va Ra Ya Sva Ha) is commonly known as the “all-powerful-ten. The interlocking body of this monogram is composed of this monogram is composed of the seven syllable - Ham Ksha Ma La Va written in Lantsa character which represents the root mantra of Kalachakra. Above the ten horizontal bar which crowns these seven interlocking consonant syllables is a crescent moon, a sun disc and a flame-tip, which completes the ten-stacked syllables, as also mentioned above. An eleventh symbol, the vowel syllable A representing the element of space – not depicted, but it merges with all of the consonant sound. In the Kalachakra tantra, there is a profound symbolic relationship with the vowels and consonants (Ali and Kali) of the Sanskrit alphabet.

As shown in this painting, the seven consonant syllables, Ham Ksha Ma La Va Ra Ya are written in a vertical column. These syllables are composed of vertical ‘legs’ and horizontal arms, which interweave like basketwork. The entire symbolism of these stacked syllables is extremely complex and encapsulating meanings, which relate to all three aspects of Kalachakra Tantra – the external, internal and alternative. The External Kalachakra refers to the external environment, the physical universe and describes the location and circulation of the sun, moon, stars and planets etc. In the external Kalachakra astronomical system, the earth is round and the sun and the moon go around the earth. The year is divided into four seasons of ninety days each. When the sun ascends north of the earth, it is a summer sun, the days are long and the nights are short. When the sun reaches the center, the days and nights are the same length. When the sun descends south of the earth, it is a winter sun, the days are short and the nights are long. The Internal Kalachakra refers to the beings who live within the physical universe and describes the bodily channel, ‘winds’, and drops of fluids and how they circulate inside the body. Both the External and the Internal Kalachakra world need to be purified. The Alternative Kalachakra refers to method to reach enlightenment, together with their results. Apart form initiations it symbolizes the 10 powers, 10 forces and 10 perfections (paramitas). The Alternative Kalachakra initiations authorize the person, who takes an aspirant to follow the systematic Kalachakra path that led him to Buddhahood. However the main symbolism of the ‘all-powerful ten’ relates to the cosmology of the mount Meru and its surrounding universe according to Kalachakra, and to the complex geometrical mandala palace of the deities Kalachakra with his 722 attending deities.

At the base of this monogram is ‘Ya’ syllable, symbolizing the disc of wind or air on which the mandala rests. This ‘Ya’ syllable is black and composed of the first vertical leg, which rests on the lotus throne and another black inner vertical line which runs parallel to the first leg from its double-line, plough-shaped, consonant form. The second leg represents the red disc of fire, formed by the single pointed red syllable ‘R’. The third leg is white and represents the white disc of water formed by the U-shaped white consonant ‘Va’. The fourth leg is yellow representing the disc of earth and forming the lance and crescent shape of the yellow syllable ‘La’. The fifth leg red and terminates in the oval shape of the syllable ‘Ma’. This oval is shape is divided into four quadrants, represents mount Meru and the mandala palace itself, the four sides of the oval are colored red on the right, yellow at the bottom, white on the left and black at the top – which correspond to the four directions of south (red), west (yellow), north (white), and east (black) of mount Meru according to the Kalachakra system of cosmology. The sixth leg of the syllable ksha is green and represents the green. The seventh leg of the syllable Ham is dark blue and geometrically forms both the sixth horizontal arm and ‘head’ of these seven stacked consonants. This broad dark blue head is shaped like the cross-section of a lotus blossom, symbolizes the four formless god realms above the mount Meru and the deities of the mandala enlightened wisdom. The crescent moon, solar discs and flame-tip above the head of the seven-stacked syllables refers to the three psychic channels and the deities of the mandala of the great bliss, which crowns the center of the Kalachakra mandala. These three symbols commonly occur above many seed-syllables and are known as the visarga, anusvara and tilak or nada, respectively.

In simple meaning of the symbolism ten powerful syllables Kalachakra mantras are as follows:

This description is by Dr. Shailendra K. Verma, whose Doctorate thesis is on "Emergence and Evolution of the Buddha Image (From its inception to 8th century A.D.)". 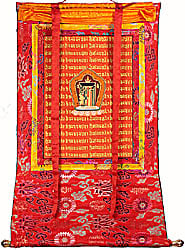 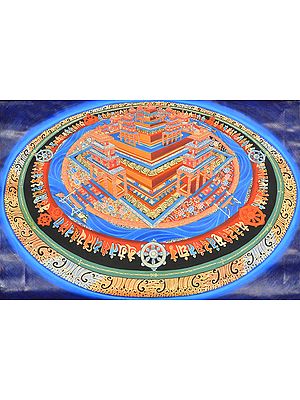 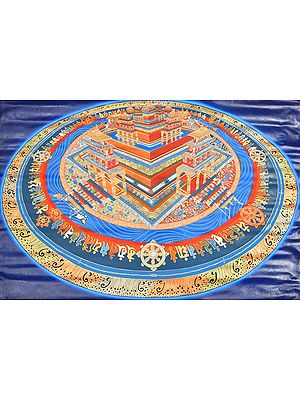