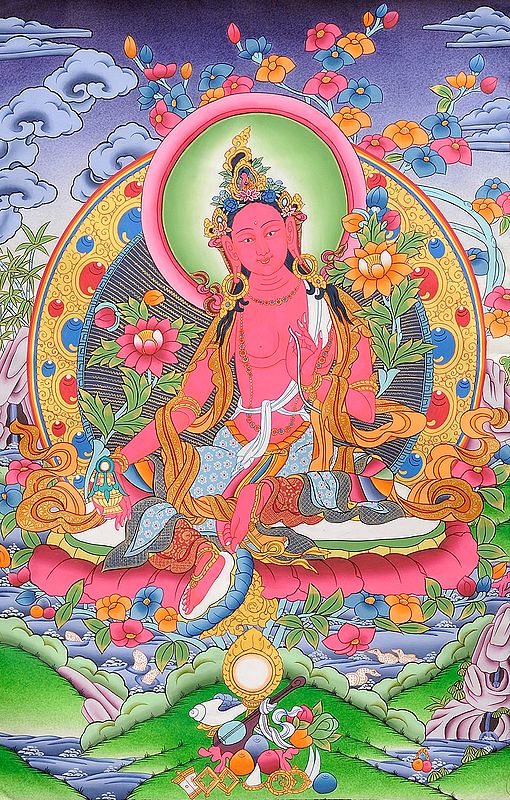 $295.00
Notify me when this item is available
Save to Wishlist Send as E-card Share by Email
The name "Tara" is the most powerful mystical name and it refers to the pupil of the third eye of wisdom through which the Cosmic Mother visualizes the world-drama. In other words, Tara refers to the intuitive vision or darshana, that is, human beings may know the nature of the ultimate Truth or Reality through darshana which may be granted by the grace of Mother Tara. The term 'Tara' also refers to 'pilotship' of the ferry-boat of life. Mother Tara ferries across all her devoted children through the stormy ocean of mundane existence. Thus the name Tara means also One Who saves. It is said that Tara's compassion for living beings, her desire to save them from suffering is stronger than a mother's love for her children. As Manjushri is the Celestial Bodhisattva who represents the wisdom of all Buddhas and Avalokiteshvara is the one who represents all their compassion, Tara is the Bodhisattva who represents the miraculous activity of all the Buddhas of past, present, and future.

The cult of Tara was propagated by Dipankara Atisha in the Land of Snow. She became one of the most popular deities of Tibet after her two principal forms, White Tara and Green Tara, were assimilated to the two wives of the first great Tibetan king Sron-btsan-sagm-po. The Mahavairochana-sutra relates her name to "Tara" "pupil of the eye". The Manjushrimulakalpa calls her "the compassion of Avalokiteshvara." She is actually the active power of the compassionate look diffused over all the points of space to save suffering creatures. She is the force of compassion that saves (tarayati) the afflicted. Her manifold refractions are epiphanies of the serene strength of compassionate intuition.

There are twenty-one forms of Tara-the most popular and powerful are Green Tara and White Tara, as mentioned above also, however Brown Tara is also popular as she holds long-life vase, so bestows boon of boundless life. She is shown here seated in lalitasana on moon disk on a lotus flower. Her right leg is pendant on a smaller lotus with moon disk. Her left leg is folded into her lap. She is holding a long-life vase in her right hand, which is extended forward in the boon granting gesture, and in her left, stem of a blooming lotus with smaller lotuses and buds, symbolizing all the Buddhas of past, present, and future.

She has a sweet young face. Her hair is partly upswept in a knot with beautiful decoration on it and partly falls on her shoulders. She has three eyes and adorned with gold crown with jewels. Moreover the jewelry she is wearing includes exquisitely design earrings, necklaces with jewels, armlets, bracelets and anklets. Moreover, she is wearing a flowing scarf, dhoti with leggings made of multicolored bands of silk. There is a halo and aureole behind her head and aureole, respectively. The border of aureole is floral rendered in gold with gemstone. Moreover aureole is encircled with lotus flowers and leaves.

The peaceful offerings of five senses are depicted on a lotus that sprang up in a lake, in the bottom centre. The five offerings of sensory enjoyment represent the most beautiful objects which attract the five senses  sight, sound, smell, taste and touch. These offerings invariably take the form of  a mirror for sight, cymbals for sound, an incense-laden conch shell for smell, fruit for taste and a silk scarf for touch.

The landscape illustrates the five great elements  earth, water, fire, air, and space. The element earth is represented by rock formation and mountains, water by lake and waterfall, fire by flame (here the motif of fire in the form of flame is depicted around aureole), air by cloud formation and space by sky. The extended brocade depicts Ashtamangala symbols, Dharma Chakra and Endless Knott. This rare painting of Tara is very much suitable for sadhana and practices. 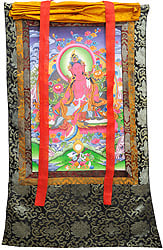