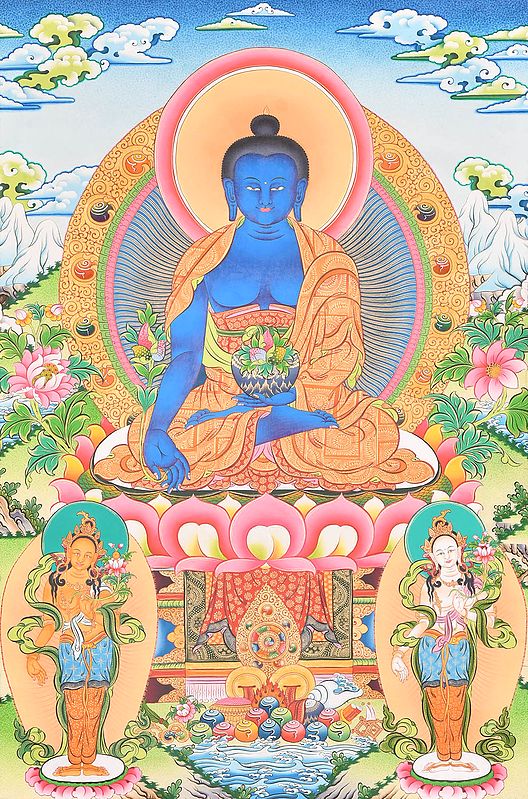 $595.00
Bhaishajyaguru is the god of medicine, the physician of human passion, the unfailing healer of the ills of samsara. He is of dark blue color like lapis lazuli. His body radiates healing rays of energy to all suffering beings. The cult of Medicine Buddha is very much popular in Tibet and almost in all Buddhist countries, especially in Northern Buddhist countries.
Quantity
Notify me when this item is available
Post a Query

The Medicine Buddha is believed to be a transformation of Shakyamuni Buddha, who manifested himself as the Medicine Buddha in order to give the medicine teaching to the fourfold assembly of Hindu Gods, Sages, Bodhisattvas, Arhats and Adepts etc. On the other hand it is also said that Medicine Buddha had attained perfect enlightenment many eons previously. He vowed that his Buddhaverse would be a world of healing, and that throughout Buddhaverse, wherever beings suffer from sickness and injury, he would eternally manifest to bring them his healing knowledge. According to Chinese travelers, Hsuan-tsang and I-tsing his paradise in the east is called "pure world created in lapis lazuli."

He is shown here seated in vajraparyankasana on a moon disk on lotus flower on a throne that is held by two snow lions. Graceful leaves and flowers curl around his mandorla. He holds the myrobalan (arura) plant in the right hand and the left hand has a pot of medicines. He is draped in traditional monk's robes. Offering to the five senses within a mirror are in front of him. His expression is calm and serene, and he does not wear a crown over the head. The image of Bhaishajyaguru has been shown against a mountainous landscape.

The Bhaishajyaguru dharani emphasizes the healing value of creating an image of the Medicine Buddha as well as chanting the text. It is said that Tibetan physicians take initiations to practice the sadhanas of Medicine Buddha. Healing the body is very important to Tibetans since a healthy mind, necessary to develop spiritual qualities, can best exist in a healthy body.

Tibetan Medicine is mainly based on both the ancient Indian Ayurvedic and Homeopathic materia medica. The foundation of good health is the equilibrium of the elements of the body, while disequilibrium results in illness. The physician concentrates on restoring the balance within the body and mind. The Tibetan doctor must study and memorize many complex medical texts and thangkas, learning to diagnose the patient through pulse taking and urine analysis, learning herbal pharmacology, and other treatments, studying psychology, and apprenticing many years before he or she can practice.

Thus the present painting of Medicine Buddha is very much suitable for sadhana by laities, physicians, sadhaka and also for suffering beings.

This description is by Dr. Shailendra K. Verma, whose Doctorate thesis is on "Emergence and Evolution of the Buddha Image (From its inception to 8th century A.D.)".