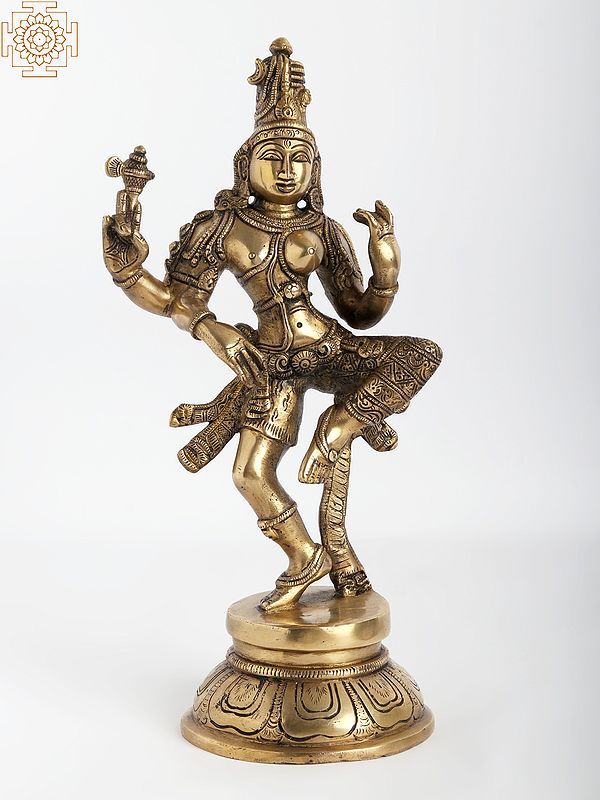 11" Dancing Ardhanarishvara (Shiva Shakti) In Brass | Handmade | Made In India

Ardhanarishvara is that state of Shiva when this ultimate man, who is a symbol of masculinity became half-woman. This form arose when after Shiva and Shakti’s (Parvati) marriage, Goddess Parvati insisted her consort on experiencing that state where he is entirely within himself, so to fulfil her wish Shiva shed half of himself to fuse with Parvati, thus forming Ardhanarishvara; this form manifests that masculine and feminine are equally divided within yourself and if they meet, you are in a perpetual state of ecstasy. It is the divine glorious androgyne, worshipped dedicatedly in many parts of the country.

Shakti is on the left side and Shiva towards right, shown with combined expressions of happiness and joy; Ardhanarishvara is seen dancing in euphoria on an inverted lotus pedestal; Lord Shiva's dhoti is made of tiger skin and ends at his thighs, while that of Mother Parvati is heavily decorated and modestly extends down to her ankles also ornamented in high-end jewels that glorify Shiva’s divine self.

Depicted with three hands, where Shiva is shown with two and Parvati with one, suggesting Shakti’s lesser role in the icon. Shakti carries a lotus in her hand and Shiva holds one of his implements with the anterior hand facing downward in an elegant dancing mudra; marvellous structures and carvings of the long crown reminds us of the beautiful South Indian temples.