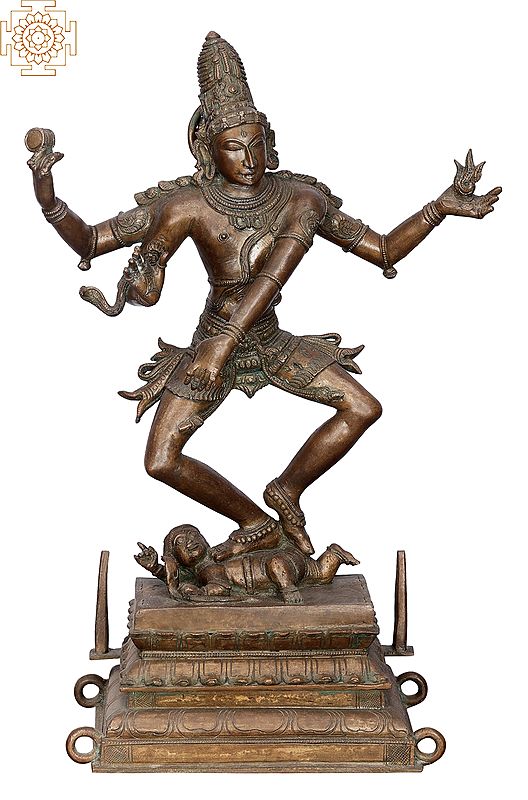 Shiva, the highest of all beings as per the Hindu tradition is associated with all states of human consciousness in his various depictions. While sometimes he meditates in all pervading silence, he could also be found dancing in vibrant ecstasy and joy. Unlike the set pattern of dances, the dance of Shiva has no holds barred. He dances with the movement of energy and expresses his innermost core through his dance. His dance is known as Tandava Nritya(dance). Shiva does Tandava either when he is in a state of extreme ecstasy or a mood of destruction. His energetic dance becomes the very expression of the most primordial energy manifesting in his formless form.

Shiva in his Tandava Nritya is the embodiment of extreme energy and exuberance. This beautifully crafted bronze statue captures him in the swift motion of his body that creates an aura of beauty and joy. The face of the lord looks serene and calm. He is standing with his right leg on the demon of ignorance while the left leg is slightly lifted in the air. The four-handed god holds the fire of knowledge and his Damru(an Indian musical instrument) in the upper hands. While the lower hands are in various mudras to complete his dance form. Standing on a small platform, the lord is adorned with a beautiful crown and many other pieces of jewellery on his partially bare body.

The smallest of details has been given attention to in this beautiful handmade statue using the ancient Madhuchista Vidhana technique. The statue is both intense as energy and still as silence symbolising the balance of Purusha and Prakriti in the existence. Lord Shiva in his Tandav dance opens the mind to new dimensions of understanding and peace that is generally missed by most.