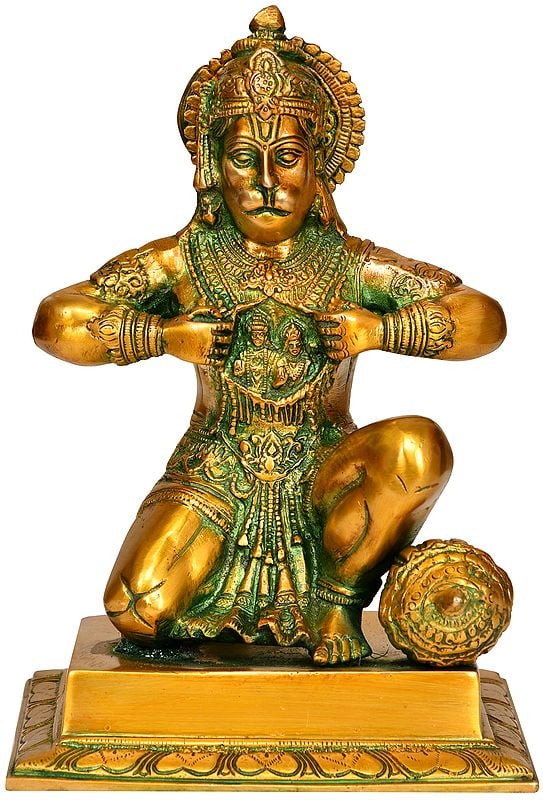 Best Seller
FREE Delivery
$175
Hanuman, the monkey god, is known to be the supreme destroyer of evil, Lord of victory, and Lord of Strength. As a devotee of Rama, he is well known for his deeds in Ramayana, where he aided Rama in rescuing his wife, Sita, from the evil king Ravana.

He is depicted tearing his chest to reveal Rama and Sita. This occurred after he aided Rama to victory over the evil Ravana. Rama, who was crowned the emperor after the win, held a ceremony to reward his allies and supporters. He considered Hanuman as who deserved the highest honor, making Sita give Hanuman her necklace of precious stone. Hanuman tore the necklace to see if Rama and Sita are engraved in the stones. He is so devoted to Rama that he decided he will not wear the necklace if Rama and Sita were not in the precious stones. The spectators on looking mocked him, saying his devotion to Rama and Sita was not as he was depicting. In response, Hanuman tore his chest wide open, and everyone was stunned to see the image of Rama and Sita in his chest.

Hanuman has also been presented as an incarnate of Lord Shiva. He is the son of Anjana and Kesari. He is also described as the son of the wind-god Vayu, who, according to several stories, played a role in his birth.