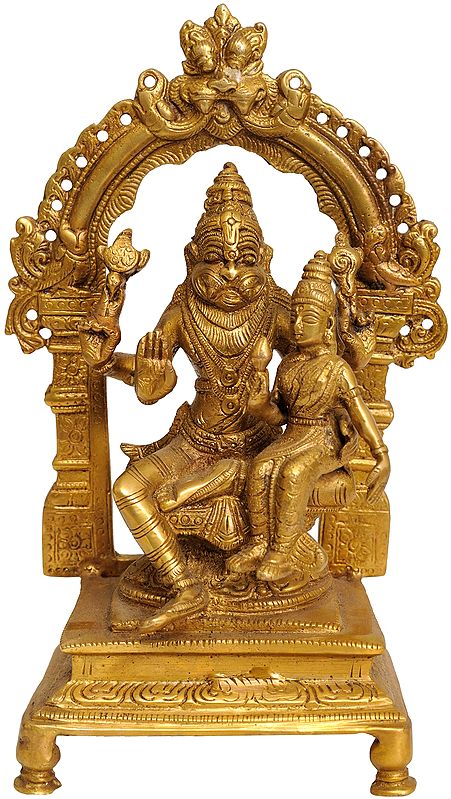 Their Lordships, Shri Lakshmi and Narasimha can be seen sitting on a beautifully carved inverted lotus placed on a rectangular throne. Lord Shri Narasimha is an incarnation of Supreme Lord Narayan (Vishnu). This form of the lord is of a half man and half lion. This is a unique and amazing masterpiece which displays us the smiling face and loving side of Lord Narasimha. Shri Lakshmi Devi can be seen residing on the lap of her husband Narasimha Dev.

Lord Narasimha is worshipped as the protector deity because he protected his dear devotee Prahalad ji from his demon father Hiranyakashipu. Here we can also see that its a beautiful depiction of love between Lord Narasimha and his wife Lakshmi ji. Lord is in his four handed form and all of the hands are symbolizing something. The lord here is seen holding his usual Ayudhas (implements) in his hands. In the upper right hand of the lord we can see him holding the divine disc named Sudharshan. In the upper left hand he is holding a holy conch which is also known as shankh. We can see that Lord Narasimha is showing an 'Abhaya Mudra’, by his left hand and is holding Goddess Lakshmi with the right very gently.

As a matter of culture and tradition, we can see that Shri Narasimha Dev is wearing a graceful Dhoti. Shri Lakshmi ji is wearing an elegant saree as well as holding a transcendental lotus in her right hand. Both of the deities are wearing beautiful lustrous crowns. We can see that Lord Narasimha here is in a peaceful mood wearing an Urdhava Pundra (Vaishnava Tilak) on his forehead. The lotus feet of the divine couple are marked with sacred symbols, leaving a vibrant impression on the viewer. As there's a verse mentioned in the scriptures, 'Alankaar Priya Vishnu’ (Bhagawan Vishnu appreciates shringara). We can therefore see him wearing a huge amount of jewels, pearls and necklaces.

The Kirtimukha behind the deity adds a highlight to this illustrative masterpeice and along with that it also represents the Gopurams (entrance gates) of the South Indian Temples. This is one of the rare artwork which involves a variety of traditions, cultures and it also represents the diverse variations of Vaishnavism and Sanatan Dharma.