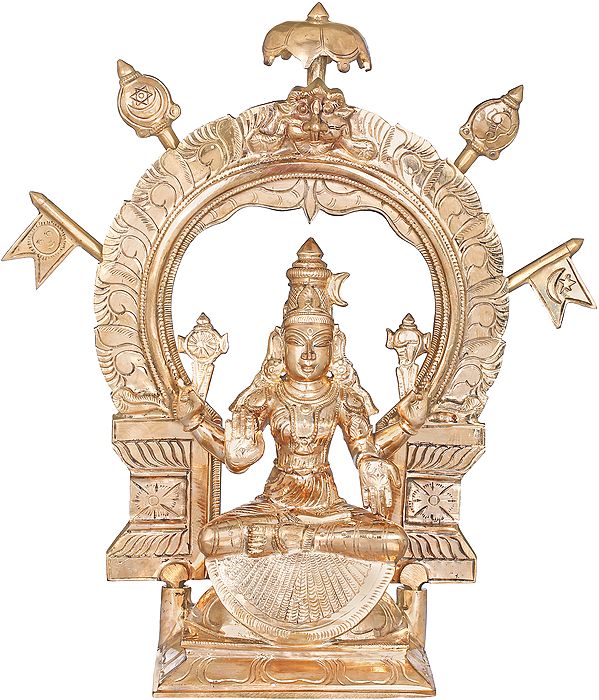 $795.00
A personification of Adi Parashakti (primordial energy) and the Southern incarnation of Devi Mahalakshmi, Devi Mookambika is revered as the mother of the universe. She is a composite of the Tridevi, an amalgamation of Devi Parvati, Devi Lakshmi, and Devi Sarasvati. Born to destroy the demon Kamasura, She is a force to reckon with. The murti of Her that you see on this page depicts Her in a tranquil state of being.

She is chaturbhujadhari, the one possessed of (‘dhari’) four (‘chatur’) arms (‘bhuja’), in keeping with the prayers of Adi Shankaracharya. The great scholar had longed for Her to come to Him as the chaturbhujadharini and She did, proof of which lies to this day at the Kollur temple where He then installed Her. Her legs are gathered in a graceful ardhapadmasana, beneath which the pleats of Her saree cascade down the front of Her throne. One could make out the upturned lotus throne and the lotus engravings on the pedestal on which it stands.

The seated figurine is flanked by a pair of stockily sculpted pillars. There is a wide-set aureole that goes high over Her crowned head, the base of which stems from either of the pillars. A Kirtimukham aureole at its zenith establishes this composition as a distinctly Southern work. So do the angular features of Devi Mookambika’s face and the sharp curves of Her form.