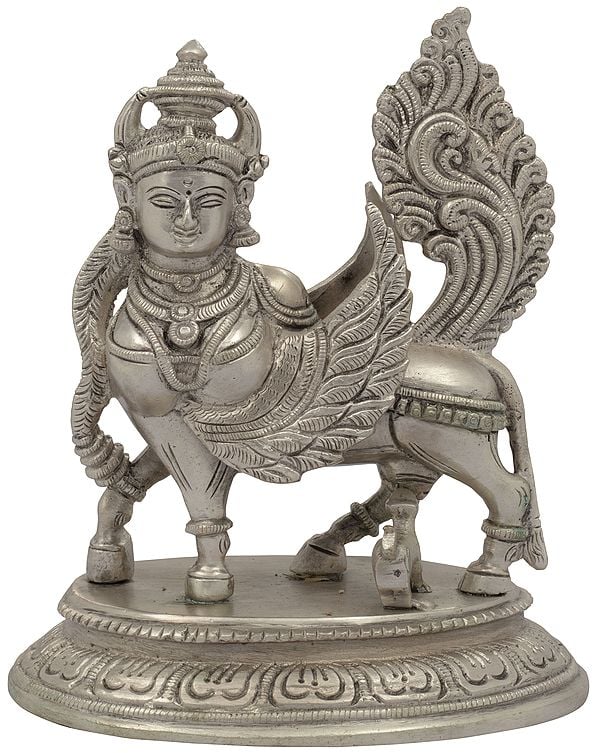 $138.00
Notify me when this item is available
Save to Wishlist Send as E-card Share by Email
This brass statue represents the human transform of the mythical cow Kamadhenu, the theme of many legends. Though sometimes considered as three different beings, Surabhi and Nandini are only others names of Kamadhenu. Scriptures refer to more than one Kamadhenu which sometimes seems to suggest that Kamadhenu was a generalization of any cow having divine or celestial attributes. In Sanskrit one of the meanings of ‘Kama’ is ‘ichchha’ – wish, and of ‘dhenu’, cow; thus, Kamadhenu denoted the wish-fulfilling cow. The progenitor of the entire range of cattle and believed to be a primordial power with a form wherein enshrined all gods and divine powers Kamadhenu is listed as one of the goddesses in Hindu pantheon and thus her human transform.

The mother of all cattle and the one who fed all gods and sages by her abundant milk that she produced, in some traditions Kamadhenu is included among Matrikas too. Incidentally, this image of the celestial cow has represented with the mother also a calf feeding on her thuds, something not usually seen in representations of Kamadhenu, perhaps because it only sought to individualise her, an otherwise divine form having universal dimensions. Maybe, while humanizing the cow into a divine form the artist’s mind was possessed of Kamadhenu’s Matrika links. However, in her form, partially human, cow-like and with feathers and a peacock-like tail, and with a lotus pedestal, the artist has conceived her as the being of the earth, ocean and the sky, that is, as having cosmic dimensions.

In mythological tradition Kamadhenu as Surabhi has her lineage from Brahma through Kashyapa and Daksha, Brahma’s descendants. Surabhi is variously alluded to in Puranas as Daksha’s daughter, Kashyapa’s wife, as also his daughter and the like. She is alluded to as undergoing ten thousand years long penance and winning from Brahma thereby her divine powers and status. Like Indraloka, Brahmaloka and others, Brahma created for her ‘Goloka’ as her independent ‘loka’ or region. Though more popularly Kamadhenu is attached to sage Vashishtha as his cow, she has associated with her several legends, mainly Vishvamitra-related, both when he was a ruler as also when he was performing penance in the forest, as also those related to Ashta Vasus, king Vaka, Indra, sage Agastya, Krishna and sage Jamadagni, the father of Parasurama.