Devi Sarasvati, Cradling The Veena Like A Mother Her Baby 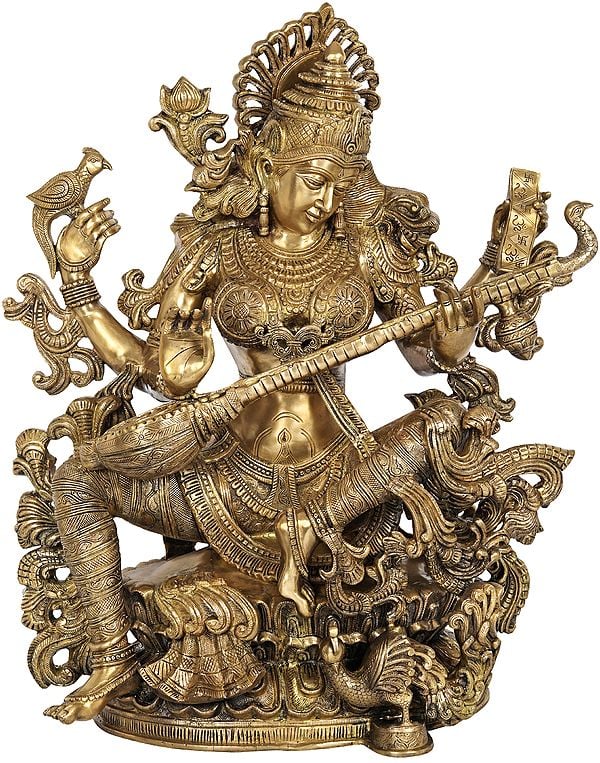 $4495.00
The gorgeous Devi Sarasvati sits in lalitasana on Her lotus pedestal. It is strikingly different from your run-of-the-mill lotus pedestals found in Indian iconography. The petals are layered one above the other in the upper tier, each of them characterised by delicately pronounced curves. In fact, the whole composition is defined by these delicate curves, a prime example of which is the plumage of the frontal-facing peacock, the vahana of Devi Sarasvati, to the left of the front of the pedestal.

The Devi Herself cuts a beauteous figure poised gracefully upon the centre of the lotus. Her limbs, as long and slender as the neck of Her veena, are wrapped tightly in a dhoti of richly embroidered silk. A cascade of streams of gold beneath the navel, of the girdle which holds it around Her hips. Her plentiful torso and the narrow waist beneath it are adorned with a world of shringar, carved against Her superb shape with a consistent attention to detail. She is chaturbhujadharini: in Her posterior hands She holds a parakeet and a pothi (presiding deity over education), with Her anterior hands She strums the veena and metes out blessings.

A network of vines frames the central figure. They seem to emerge from the structures of Her limbs in all their freshness, just like the thick masses of Her hair emerges from beneath Her crown. The elongated kundalas dangling from Her karna and the sprig of lotus bud in Her hair are distinguishing features of this example of Sarasvati iconography.