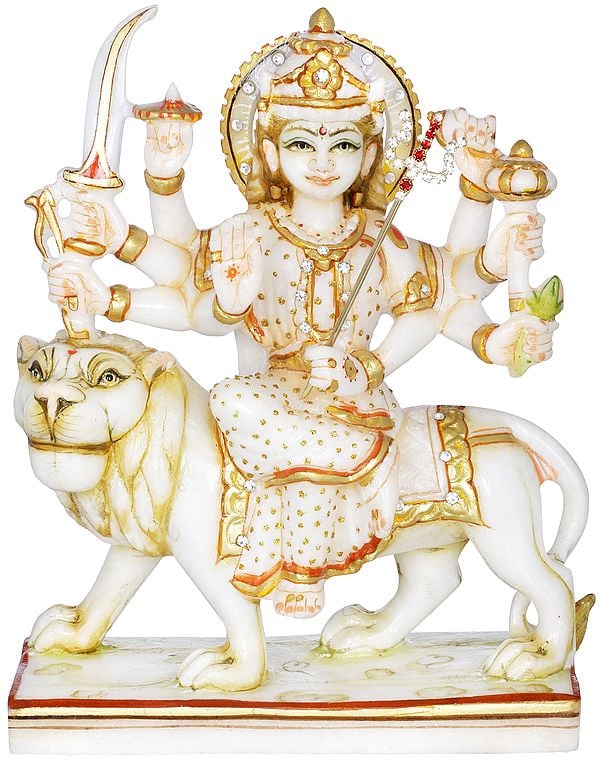 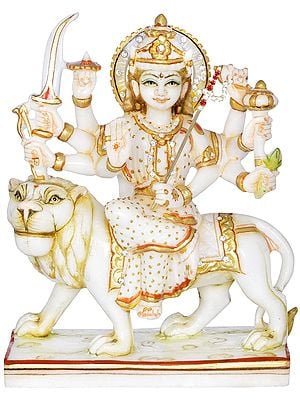 Goddess Durga is the warrior form of Goddess Parvati and the consort of Shiva, also, she is individually worshipped in Hindu mythology as Shakti; revered for her nature of combating evils and demoniac forces that threaten peace and prosperity, she is the fierce form of Mother Goddess who entails destruction to empower creation. This portrayal of the deity is benign and gives an essence of pure divinity, seated in lalitasana on her signature vahana, Simha (lion), carved in its most ferocious and realistic expressions with the fiery eyes and tinges of gold hues symbolizing the reflected rays of the bright sun.

Clad in the most decent attires of a shining white silk saree having gold dot motifs and a golden thin border that beautifully distinguishes its various layers; bejewelled graciously with the sun haloed crown glorifying on her bright golden hair locks. This rare statue of Simhavahini (one who rides a lion) Durga is sculpted in her ashtabhuja (eight hands) form in a gesture of abhaya mudra and the rest carrying the iconic implements signifying her docility, ferocity and nurture.

Carved out of a single stone of marble, the sculptor has shown his extreme skills very neatly and passionately, as can be identified by the deep curvature of the eyes, smiling red lips and the dominating red bindi on her forehead.