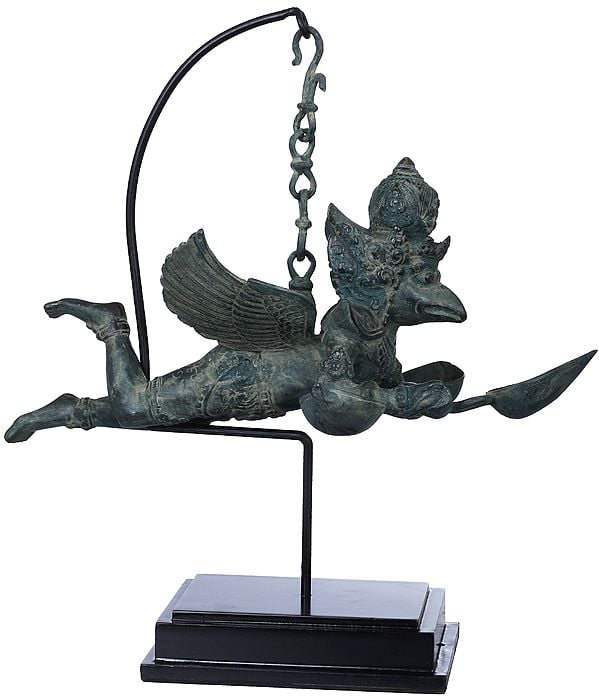 Garuda is a cosmic bird creature in Hindu Mythology and a vahana of Lord Vishnu. He has the torso of a man and the talons, wings and beak of an eagle and represents birth and heaven. Garuda is an enemy of snakes and in his iconographic depictions he is shown as holding snakes in his limbs. This lamp shown here is one of the rarest sculptures in the Exotic India collection, its preciseness, style and type defines its enormous beauty. The sculptor has taken the help of brass and wood materials while sculpting this statue. He is depicted here in a flying posture, with the left leg straight and right is bent upwards from the knee. Zoom in to appreciate the mesmerizingly carved wings in multiple layers and the large crown highlighting his grandeur.

In this statue Garuda holds a three wick stand carved in the shape of a deep leaf, pointing left, right and straight respectively. This lamp is supported by a wooden stand having a three-layered square base supporting a long stick that has a chain tied at the upper end with which the Garuda statue hangs. Garuda is revered as a major deity not only in Hinduism but also in Buddhist religion. When lighted, this lamp will spread the auspicious vibes of purity and power, as Garuda himself is a symbol of wiseness, immense power and protector.